Ian Kerr, who ran the trade union blacklist, dished the dirt on his company’s activities in evidence to the Scottish affairs committee in Parliament today. 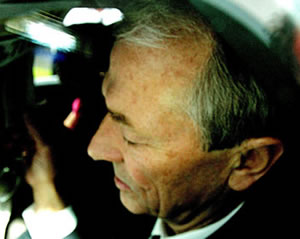 Consulting Association chief executive Ian Kerr, who ran the trade union blacklist, dished the dirt on his company’s activities in evidence to the Scottish affairs committee in Parliament today.

The activities include providing names and details of trade union members and “troublemakers” to enable corporate giants to exclude workers from employment on some of the country’s major projects.

Mr Kerr, a former primary school teacher, told MPs the Consulting Association (CA) was set up with the aid of the Economic League – leading construction firms including Sir Robert McAlpine Ltd. The construction giant chaired the group at the beginning, according to his testimony.

Construction companies paid an annual subscription fee and records were kept by the CA which Kerr facilitated as the Association’s chief executive. But he maintains the list was not a blacklist as it was not “automatic” people would be excluded, suggesting instead files kept on thousands of workers were merely for information exchange purposes.

Kerr was fined £5,000 after pleading guilty to offences under the Data Protection Act following raids on his office by the Information Commmissioner’s Office in 2009. Information was held on more than 3,000 construction workers and more than 40 contractors and companies were using Mr Kerr’s service.

During his grilling, an uncomfortable Mr Kerr – who was on £50,000 working for the Consulting Association – did admit all the information contained of each individual worker “implied criticism” of each one.

“You were working with companies to weed out people you did not want.”

“Yes that is right.”

“Were companies more likely not to employ the staff if they were on the list?”

He then went on to justify the list because of the “problems in the industry” workers who were members of the “Communist Party, Socialist Worker Party and Militant Tendancy”.

“They impeded the job getting done to a proper timescale.”

Hundreds of construction workers who have been unable to get work in the industry for years – despite labour shortages and being qualified – say the information on their union activity allowed employers to discriminate against them. Many claim to have not been “militants” but former health and safety representatives on sites.

However, several trade union activists who took part in left wing political meetings outside of work claim political and personal information could have only been obtained by collusion with the security services.

“That man [Mr Kerr] has ruined my life.

“The secret files the Consulting Association kept on me were used to unfairly dismiss me on job after job for no more than raising genuine safety issues such as drying facilities and Weils Disease caused by rats urine.”

Mr Acheson, whose Blacklist Support Group has been nominated for the Liberty Human Rights Award for their campaigning against blacklisting, said he believed Kerr to be a “criminal”.

“But he was only the foot soldier for the directors of multi-national construction firms.

“The select committee should demand that he names names. Who were the senior industry figures that paid his wages and orchestrated this vile conspiracy? What was the involvement of the police and corrupt trade union officials?

“Whether they are from big business, the state or the unions: the guilty should be brought to justice.”