Ed Jacobs reports on the latest SNP/Labour row in Scotland - this time on corporation tax. 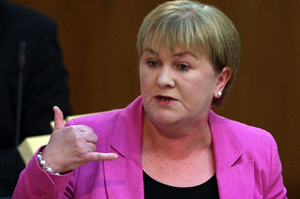 Scottish Labour really must do better.

In a report (pdf) published today by the IPPR on the impact on northern England of potential Scottish independence, the think tank notes that in the event of corporation tax being cut to 12.5% – a proposition supported by a number of businessmen and women north of the border, and in line with Ireland – the deficit in Scotland would increase by almost £4 billion a year , requiring close to 8% growth to plug the revenue gap that would emerge.

“…shows that under the SNP’s plans to cut Corporation Tax to 12.5%, Scotland would increase its budget deficit by almost £4 billion a year, requiring economic growth of almost 8% or unparalleled cuts to the public sector to cover the shortfall created.”

The only problem is that the SNP’s policy is to cut corporation tax to 20%, a position the IPPR states is “achievable”.

“The likelihood of Scotland being able to slash corporation tax to 12.5 per cent – as some leading Scottish business figures argue it should – seems remote, in the short to medium term.

“Indicative calculations carried out for this paper indicate that GDP growth of approximately 8 per cent would be required to make up the lost revenue – a tall order, especially in the current economic climate.

“The SNP’s commitment to a 20 per cent rate of corporation tax looks more achievable, although this will require GDP growth in the region of 4 per cent – still a risky proposition. Furthermore, Scotland is a complex society and deep tax cuts would weaken its tax base, and that is something that comes with consequences.”

Whilst Scottish politics is often more hot air than anything else, Scottish Labour would do well to establish what SNP policy actually is before attacking it.

Whether it’s a cock-up or conspiracy, the message is simple, Labour must do better…

4 Responses to ““Financially illiterate”? Scottish Labour must do better”