Make no mistake, the hiring of Lynton Crosby by David Cameron represents the outward return of the nasty party, the Tory Party of old. 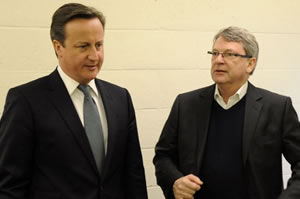 The nasty party is back – if it ever truly went away that is.

Make no mistake, the hiring of Lynton Crosby by David Cameron represents an outward return to the dog-whistling, anti-immigration, anti-Islam bigotry of old. What a far cry from the spin of ‘compassionate Conservatism’, a party lead by a ‘modern’ Cameron, the “heir to Blair”… today, the pretence of a man and a party at ease with modern Britain, looking forward not back, a party for all, is surely dead and buried.

The Mail on Sunday reports:

The man David Cameron has picked to head his Election campaign once launched a foul-mouthed rant against Muslims. Outspoken Australian ‘fixer’ Lynton Crosby used the phrase ‘f****** Muslims’ in a diatribe while working for London Mayor Boris Johnson…

Mr Crosby’s outburst came earlier this year as Mr Johnson’s aides discussed whether to devote more attention to wooing the ethnic minority vote in his battle with Labour’s Ken Livingstone. According to a source, Mr Crosby said Mr Johnson should concentrate on traditional Tory voters instead of ‘f****** Muslims’.

As Nick Lowles of Hope Not Hate writes, Crosby’s track record of hard-right fearmongering and myth-pedalling is well known:

Crosby is known at pushing populist issues around immigration and crime and creating ‘wedge’ issues to differentiate political parties and split the opposition. In Australia, where he is from, Crosby masterminded John Howard’s numerous election victories but often by running what many considered were racist and inflammatory campaigns.

In the 2001 Australian General Election Howard’s government ministers falsely claimed that seafaring asylum seekers had thrown children overboard in a presumed ploy to secure rescue and passage to Australia, and Howard, in the final days of the campaign, launched a slogan that later grew notorious: “We decide who will come into this country.”

This was similar to Michael Howard’s “Are you thinking what we are thinking?” campaign slogan in the 2005 General Election, and which included a series of posters, billboards, TV commercials and direct mail pieces with messages like “It’s not racist to impose limits on immigration” and “how would you feel if a bloke on early release attacked your daughter?”focused on hot-button issues like dirty hospitals, landgrabs by “gypsies” and restraints on police behaviour…

And – significantly – the Conservatives will once again earn the title of the Nasty party. Comments from Crosby like “f***ing Muslims” are likely to haunt David Cameron but he will only have himself to blame.

Lowles adds that the hiring of Crosby is not only symbolically significant (in a bad way), but is also unlikely to achieve electoral success:

Given Crosby’s track record, his hiring will also probably result in the abandoning of a strategy which has been devised by Conservative Party Central Office over the past twelve months to appeal to minority communities. This was motivated by a desire to demonstrate its more moderate, centrist face but also a realisation that it is unlikely to win a majority after the next General Election without increased support from particularly the British Asian communities.

Indeed, it has drawn up a list of 15 constituencies across England where the votes of minority communities are essential to the Conservatives winning. All are currently held by Labour and CCO believe that without victories in these constituencies an overall election victory is unlikely. Crosby’s appointment will not make this job any easier.

It is a point expanded on by an exasperated Ian Birrell – a former speechwriter to Cameron in the Tory leader’s modernising days – who points to the abject failure of Mitt Romney’s anti-women, anti-BAME, ‘angry white man’ approach:

The party has adopted a sensible strategy revolving around defending its 40 most vulnerable seats while focusing on 40 others needed to win. This would, however, be jeopardised by a negative, right-wing stance driving away much-needed Liberal Democrat, female and ethnic minority voters. Mitt Romney has demonstrated the wisdom of such an approach in the US.

If the party is to prosper, it must learn the lessons of the past. It needs to find ways to broaden its appeal to minorities; not being white is, after all, the single biggest determinant in not voting Conservative. Instead, they have appointed a man who could undermine all that David Cameron stands for and whose approach risks long-term damage to the party brand.

It is this that makes Crosby’s hiring such a regressive step, even if he does impose order on an operation that has been dysfunctional at times. For it is a step back into the nasty party past, a major setback for the modernisers trying to turn the Tories into a more powerful and positive electoral force in tune with a changing nation.

If the Tories revert to his reactionary tricks, they risk profound damage to their long-term prospects.

The Tory right have been appeased – but at what cost to Cameron’s image, appeal and future?

Labour frontbencher Michael Dugher today wrote to the PM calling for Mr Crosby to make a public statement about the claims.

Yesterday Mr Crosby, whose tactics helped to win four elections for former Australian prime minister John Howard, said he had absolutely no recollection of using the phrase and that any suggestion he was racist was “mischievous”.

But in his letter to Mr Cameron, Mr Dugher says: “Mr Crosby has been given the opportunity to deny using these words, and has refused to do so.”

The Labour party vice-chairman calls on Mr Cameron to “fully investigate the claims that Mr Crosby used such appalling language against Muslims”. If true he should “refuse to give someone with such views a role in your Party”.

“I hope you agree that there can be no place for racist attitudes or language such as this in any modern political party,” Mr Dugher adds.