A landmark case in Gloucestershire illustrates how short-sighted government policies have damaged the NHS. 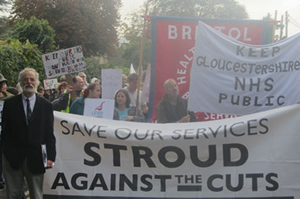 There is a landmark case of private health care provision to be found in Gloucestershire.

As Caroline Molloy of Stroud Against the Cuts (SATC) told me:

“We were told by our local Tory MP that if the private companies expressed an interest then there would have to be a tendering process – also by people on the side of saving the NHS… we simply didn’t accept it – and decided to challenge it on the basis of the High Court stay we obtained in March.”

As a result, NHS Gloucestershire and the government were forced to admit there is a perfectly legal way for NHS services to stay in house – and most vitally, that competitive tendering is not compulsory – to the extent that Molloy even queries the need for Shadow Secretary of State Andy Burnham’s impetus to designate NHS services the preferred provider.

Certainly, the letter from then-health minister Simon Burns reluctantly admitted there are clauses in the Health and Social Care Act which show tendering is not essential – squeezed out of him like water from a stone. This came as a result of pressure from the Gloucs campaigners’ lawyers, QC David Lock and solicitors Leigh Day and Co – but only after the Bill had become an Act.

Based upon this, Molloy believes people have got too caught up in the competition element, whereas if local people make it clear they retain some of the decision-making power, the market influx is not inevitable – or indeed necessary.

Molloy encourages anyone in the country wanting to challenge local decisions to embark on a transparent and accessible public consultation. Remember, local decision makers retain the ultimate discretion regarding service contracts. The previous High Court dictat required NHS Gloucestershire undertake a full consultation – to look again at options and to scrap their decision to put Community Services out to a social enterprise model.

As a result, Gloucestershire is the first place in the country where public and staff were involved in a consultation about the future of their local health service delivery – and it has seemingly paid dividends in helping to get the result local people wanted, with 96% of the public respondents (a cross section of voters) and 91% of staff giving a resounding yes to the question “do you want this to stay an NHS Trust?”.

Molloy agrees this is unprecedented and hopes other areas will follow suit – before it’s too late. She also queries the applicability of EU Competition Law, which does not apply to arrangements made without tendering between NHS bodies.

She sees their outcome as flagging up the extent to which it is politics, not law, which will ultimately decide the fate of the NHS, one way or the other. However, as we have seen in the case of Devon CAMHS (Child and Adolescent Mental Health), the tendering process tumbleweed has already been set in motion in so many areas.

The Stroud campaigner believes the level of ignorance about the amount of ‘wiggle room’ in the Act is widespread – and even though the majority are saying the same, it doesn’t mean that they are right.

This result demonstrates “what we can do – if local people see in time and are prepared to challenge decisions which go against the NHS”. If Nick Clegg gave us a clue as to the extent of the choice rhetoric, “services will only be given over to competition where people want it” – then there also needs to be sufficient awareness and community strength to challenge the received Whitehall ‘wisdom’ and this most complicated piece of legislative nonsense.

Molloy recognises they had access to ‘fantastic lawyers’ via the legal aid system – so recently under sustained attack by the Tory government – which she counts as the fifth plank of the Welfare State – and were able to turn the relevant parts of the Act inside out, such that Simon Burns had no room to manoeuvre.

This area is a Tory heartland, many respondents were not natural Labour supporters – though of course Stroud and Forest of Dean both have a long history of people standing up for what is right.

With the Primary Care Trust (PCT) about to be abolished, it left various options to meet with the purchaser/provider split (which Molloy believes has been so harmful to safeguarding services), the options being existing trust/new trust/tender.

In Gloucestershire there was overwhelming support to set up a new trust – despite some discouragement, because across the south west, PCTs were told they had missed the deadline. However, under legal pressure, this ruling was also found to have feet of clay and by the “stroke of the letter from Burns” they achieved their victory.

All politicians want to be identified as supporters of the NHS, and to winkle out any empty rhetoric, SATC found it a useful tactic to write a pledge as a very public means of measuring commitment:

“We want our chance to have a say – and we want our services to stay in the NHS.”

With an unusually supportive local press, their Tory MP’s continual refusal to sign became a very public matter, which helped to highlight the government’s real stance.

Molloy also expresses gratitude to the people of Gloucestershire in obtaining this landmark ruling and also to the Legal Services Commission, as well as Keep Our NHS Public (KONP) and Professor Wendy Savage who set them on the route in the first place.

“It’s been a long old struggle… but worth it.”

The key message is “don’t take at face value what you are told about the requirement to out-resource”. This is also a vitally important point with respect to the AQP directives through which CCG’s must fight their way.

Meanwhile, back in the Lords, Lord Philip Hunt (@LordPhilofBrum) was unequivocal – this is the worst legislation he has ever seen. Even Baronesses Shirley Williams and Judith Jolly admitted as much – before duly trundling through the government lobby like the Twin-Set Cardies of Destiny, forever recorded inside the pages of Hansard.

In the meantime, let’s hope the Labour parliamentarians manage to retain the existing wiggle room in the seat of Earl Howe’s pants before our wonderful NHS collapses like a pack of cards in front of our eyes…