Caabu's Seph Brown outlines five reasons why the UK should back Palestine's UN bid for non-member status in the General Assembly today. 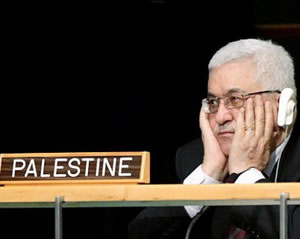 Today, the Palestinian Liberation Organisation will ask the United Nations to recognise Palestine as a non-member state.

Here are five simple reasons the UK should back this initiative:

This bid come down to the fundamentals of the conflict. The simple reality is that we either support self-determination for Israelis and Palestinians in two safe and viable states – or we do not. The UK cannot seriously suggest it supports peace via Palestinian self-determination and then not vote for it at the United Nations.

“Statehood is not a gift to be given, but a right to be acknowledged.”

The seven years between the signing of the Oslo Accords and the outbreak of the second intifada saw the single biggest expansion of settlements on occupied Palestinian territory before or since. In two decades of negotiations between Israel and the Palestinians, there has not been a single year in which Israel has not expropriated more Palestinian land.

This UN vote may not roll back settlement construction, but it has a unique opportunity to put Palestine on a more equal footing with Israel in future negotiations.

Israel has proven that violence pays. While Fatah and the PLO attempt legitimate, non-violent responses to the occupation (from weekly grassroots protest to appealing to the United Nations), they are labelled “rioters” and “unilateralists” by Israel and her supporters. Meanwhile, Hamas achieved the release of more than a thousand Palestinian detainees through the abduction of a single Israeli soldier, Gilad Shalit.

Hamas responds to the blockade and attacks on Gaza with rocket fire on civilian areas (which are war crimes) and then Israel negotiates with them. If we want to empower moderates we must support non-violent initiatives.

4) Our message to the region:

The Middle East is changing. With democratic roots taking hold, now is not the time to put Britain on the wrong side of history. The time when the opinions of Arab populations were silenced by dictators (more often than not, our allies) are over. We must send a message that we support the democratic rights of all – not just one or two Arab nations – if we are to maintain good relations and influence in the region.

Polling shows the overwhelming majority of Britain and Western Europe’s population support admission of Palestine into the United Nations. Palestinians certainly support it and even 70% of Israelis polled at the end of 2011 agreed their country should accept the outcome of a UN decision.

Underlying the absurdity of Britain’s current position is the fact the Israeli minister responsible for initiating the Olso Accords, Yossi Beilin, and Israel’s former PM, Ehud Olmert (who is no dove) are backing Palestine in the UN.

So why won’t Britain support recognition of Palestine?

William Hague yesterday outlined the UK’s official position – we will not oppose it, but we will not support it unless President Abbas meets certain conditions.

Here are three terrible reasons not to vote for a Palestinian state:

1) Palestinians ‘must return to negotiations without preconditions’:

This is, ironically, one of Hague’s ‘preconditions’ for British support of the resolution.

The Palestinian view of this was nicely summed up by Andy Slaughter MP in the House of Commons yesterday when he asked:

“Why should the Palestinians continue to negotiate over their own land, when that land continues to be colonised?”

Seventy per cent of Palestinians back Abbas’s position that they cannot continue to negotiate with Israel while it expropriates more and more of their future state and resources for settlement construction. Meanwhile, Palestinian grassroots opposition to a two-state solution is on the rise; if Abbas is forced to back down, Hamas will be the only game in town.

2) The Palestinians might go to the International Criminal Court:

Another of Hague’s preconditions, this is peculiar because the Palestinians have already signalled they are in no rush to do this. Even if they decide to, the fact the UK is worried about this is an implicit admission there might well be a case to be answered.

Assuming that is the case, think of it this way – the UK is effectively asking the victim of potential war crimes not to pursue their case because it might upset the alleged perpetrator of those crimes. This cannot be right.

3) It is a unilateral act, which violates the Oslo Accords:

First, going to the United Nations cannot be seen as a unilateral act since there is no other international institution with a more multilateral scope and approach; secondly, supporters of Israel would do well not to raise unilateralism since there is little end to the unilateralism of Israel – whether it be settlement construction or the redrawing of Gaza’s sea and land borders and so on.

The sad truth is that President Abbas’s appeal to the United Nations is not a courageous act of resistance, but an exasperated plea for help. It is the act of a man in a corner. On one side he has Hamas, who grow in strength and popularity from multiple ‘successes’ using a violent method he disagrees with, but Israel validates; on the other hand, he and Fatah are ignored by Israel and the international community despite his impressive state-building efforts and desire to see viable negotiations work.

Abbas’s popularity shrinks almost by the day, and through recognition Britain has the opportunity to reinforce not just his peaceful agenda, but to save any hope of a negotiated two-state solution itself.

• European Council of Foreign Relations: Why Europeans should vote “yes” to Palestinian statehood at the UN – November 28th, 2012