Even after the very public failings of the government's Work Programme, Boris Johnson is pushing forward with his own mandatory work experience scheme. 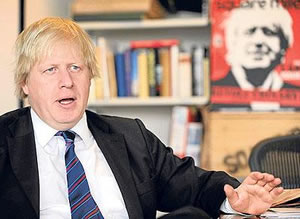 Yesterday’s work programme figures added to the ample evidence the Work Programme doesn’t work. It amazes me the Mayor of London is still proposing to put 6,000 young people through yet another mandatory work experience scheme without the means to check they aren’t having their time wasted.

In London, 136,150 people were forced through the Work Programme, and only 4,800 got sustained jobs. More than 38,000 disabled people suffered the same fate, with only 790 getting jobs.

No doubt many still benefited from the opportunity to keep their hand in the labour market, but many more were messed around with pointless placements.

Campaigners like Boycott Workfare and bloggers have amassed many depressing personal examples of what workfare can mean.

Take this young woman with a 1st class degree:

“All it meant was running around with a mop clearing up spilled jam, alcohol and urine.”

There’s nothing wrong with her doing this sort of work, but is it really work experience that will help her get a job and advance her career? What about the man with 13 years’ experience managing clubs having to work in a British Heart Foundation shop fixing furniture?

“It’s a punishment, it’s nothing to do with work experience.”

Joe Paxton’s video diary for the Guardian, meanwhile, shows the grinding reality of life on the Work Programme.

All this has happened under the government’s nose. They simply aren’t monitoring the Work Programme closely enough to know if people are actually getting useful experience, and dismiss these anecdotes as snobbery.

So why is the Mayor of London setting up a £12 million mandatory work experience scheme, without the tools to intensively monitor it? Around 6,000 people aged 18-24 with little or no work history will be forced to undertake 30 hours of work experience a week for a 13-week period in order to take up Jobseeker’s Allowance.

The two contractors the Mayor has selected for his new workfare pilot, Maximus Employment and Training Ltd, and Careers Development Group, have respectively got 4% and 3% of 18-24 year olds into jobs in the wider Work Programme so far, hardly a stellar recommendation. Won’t this pilot just repeat the errors of the wider programme?

My annoyance got the better of me when I tried to bring these concerns up at Mayor’s Question Time last week:

The infuriating thing is the Mayor had all the tools ready to monitor the programme and promises were made to use those tools properly. A senior advisor wrote to the previous economy committee in May 2011 saying the Mayor would “establish an effective performance management framework for the Work Programme in London” to find out “how effective the Work Programme is in moving London’s long-term unemployed back into work”.

I found out earlier this year the framework didn’t get past the drawing board.

The Mayor’s skills and employment bodies also developed an Employability Performance Rating system to review contractors’ performance, and published the results in the public domain. This is promoted by the London Skills & Employment Observatory, but it won’t be applied to the wider Work Programme or to this workfare pilot.

I tried to push him on this at Mayor’s Question Time last month, when I directly asked him again to change his mind, but he brushed me off with a non-answer, in the same complacent phrases. He is content to continue with the poor monitoring approach taken by the DWP, which has so miserably let down almost a million Britons, and to rely on “payment by results” to ensure young people are given a genuine helping hand in spite of all the evidence that this is failing. Not to mention only 40% of the fee is actually dependent on results.

Voluntary work experience has been shown to work, while mandatory work experience doesn’t, particularly not in a difficult job market. So it is simply mad the Mayor is ploughing ahead regardless, showing a shameful lack of care for young people stuck in a terrible job market.