The gunpowder plot, four hundred plus years ago, was a violent reaction against incredible intolerance; tonight in Lewes, we have moved on less than we thought. 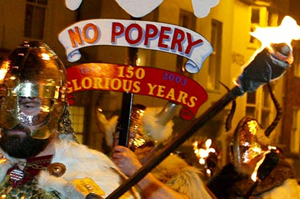 The reasons why many Britons will be donning their winter coats tonight to stand before a blazing inferno in their back garden or at some local school or pub have dimmed over the years.

The visceral events of November 5th 1605 are generally sketchy in most people’s minds. Guy Fawkes and his co-conspirators, The Reformation, and Counter Reformation have left behind a Bonfire Night ritual that is now little more than an organising concept for selling copious amounts of fireworks.

Indeed, Fawkes and his collaborators have, if anything, won a better hearing over the centuries, with a greater understanding of the complexity of those feverish years.

But in the East Sussex town of Lewes, said to be home to the largest bonfire night in the country, there is no nuance about the events of 407 years ago. Here the religious ferment of the 16th and 17th centuries lives on, with an annual ‘celebration’ which includes burning an effigy of the Pope while a parade of burning crosses remembers 17 protestants killed during the Counter Reformation outside what is now Lewes Town Hall.

Now there is nothing wrong with positive remembrance of those who were persecuted for their faith; but the burning of an effigy of what is said to be Pope Paul V is a scandalous piece of stone-cold bigotry, especially when one of the bonfire societies in the town, Cliffe, parades under a “no popery” banner each year.

No doubt mindful of its obligations under the Equalities Act, Lewes District Council euphemistically describes the event as a “key part of community culture”.

“I always tell people that Lewes is not anti-Catholic. It’s more pro-Protestant. In Bonfire there are a lot of Catholic people. It’s about history. There’s nothing sinister about it.”

Of course people in Mr Austin’s position will defend the Lewes bonfire as a largely harmless, albeit tasteless event. But what would the reaction be if that burning guy tonight was a depiction of a Muslim, Jew or gay figure?

Symbolism matters and our equalities legislation should protect minorities from discrimination and abuse. To have anti-Catholic bigotry paraded openly – whether it is dressed up as pseudo-history or not – would not be acceptable if it affected any other minority community.

Bonfire Night attracts 60,000 people to the narrow streets of Lewes, prompting organisers to warn the event is not suitable for young children.

Or Catholics it seems.