A new study by the LSE highlights systemic inequality in the housing crisis. 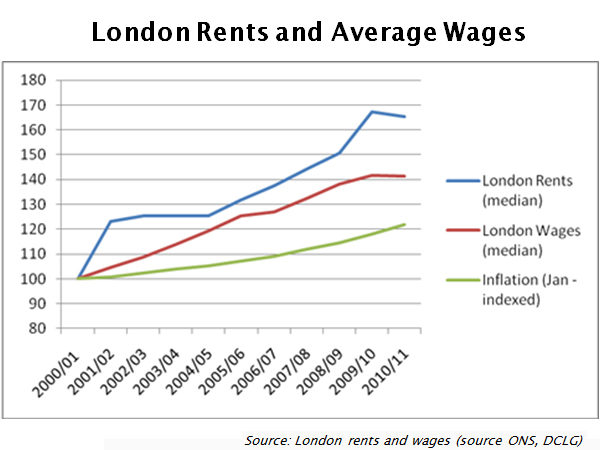 House prices are likely to be particularly irrelevant to the poorest; it is the price of rent they pay that is the crucial indicator when we speak of poor people’s experienced realities of housing markets. However, we are able to learn little about the disparity between the wages of the poorest and rent increases they face.

The data fails to highlight significant heterogeneity in both labour and housing markets; as a result, the data grossly underestimates the effect of rent increases on the poor where the use of average wages aggregates highly variable wage rates. To make this clearer, the wages of someone working in the financial sector have been aggregated with a checkout assistant in Tesco.

Increasing rents and gentrification are forcing the poorest private-sector tenants and those on housing benefit out of their homes if they can’t extend their working week to cover the extra costs.  High rents can also encourage sub-letting, a trend that leaves would be sub-letters without a social safety net, as their names do not appear on the original contracts.

From the start, landlords are able to demand less than five names on a contract in order to avoid paying a House of Multiple Occupancy Licence, leaving the remaining tenants vulnerable and exempt from housing benefit.

Welfare structures have failed to keep pace with the dynamics and contemporary realities of today’s rental market. Affordable homes will no doubt help some of today’s poor, however their effect on poverty reduction is likely to be negligible as they are unlikely to create sufficient dynamism in the housing market, nor improve the lives of the poorest in the private rental sector.

Only the state has the ability to cut through the power of landlords and Barratt Homes.

The effect of rent prices on labour markets remains resoundingly under-researched. High rents place unnecessary pressure on labour markets, forcing people to work longer hours to pay for, amongst over things, rent increases, reducing the availability of work for others. Where does the money go? To an unproductive set of landlords who profit from a stagnant housing market and fail to reinvest in new stock, nor the maintenance of their existing houses.

Greater regulation, such as the enforcement of energy saving devices, could provide an economic boost to the construction industry and reduce the vulnerability of the poorest tenants to usurious energy companies. If a landlord tax would simply be transferred to the prices tenants pay, the implementation of rent caps would place more money in their pockets.

Rent increases could be tied to the minimum wage, ensuring increases are in the interests of the poorest, whilst perhaps at the same time providing an incentive to implement the Living Wage.

Where can the money be found to invest in new council housing? You only have to look at the not-so-transparent highly profitable and exploitative relationship between tenant and landlord. If this could be tapped into, the much-needed cash for investment in new housing stock could be found. Poor people are not only exploited in the workplace, they are exploited through their consumption too.

The money exists for change – you only have to look at the exploitative relations of production and consumption. This is where the money for new policy manoeuvres can be found. Declining real wages for the working poor; increasing real prices (plus higher taxes for them where VAT hurts them harder); lower taxes for the wealthy (reduction in the top rate of tax); increasing housing, energy, food and transport prices. The poor and the not-so-poor are being hurt from all angles.

There exists a wealth of policy options available to the government that won’t hurt the poorest. This has to start with a decent and non-ideological conception of the poor. The policy options however, will not come from the current coalition government, but the protests and struggles that have marked and will continue to mark the financial crisis.