Lord Heseltine's report goes against the government grain, arguing for regulation and a reassessment of the relationship between local and central government. 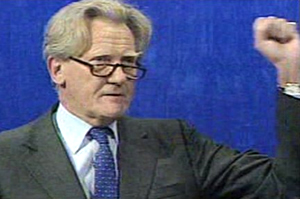 Back when he was President of the Board of Trade in John Major’s government, Michael Heseltine famously declared his approach to government intervention was to “intervene before breakfast, dinner and tea”.

It never quite worked out that way, however, as his record in closing down coalmines attests. But Hezza and the theme are back with a major report for chancellor George Osborne and business secretary Vince Cable on stimulating economic growth.

“No Stone Unturned In Pursuit of Growth” (pdf) contains 89 recommendations for action. As the blurb on the BIS website puts it: Heseltine’s “independent report” makes the case for “a major rebalancing of responsibilities for economic development between central and local government, and between government and the private sector”.

In it, Heseltine calls for a new industrial policy, recognising:

“…the very words are controversial. With them comes the baggage of past attempts and past failures.”

In particular, Heseltine calls for a National Growth Council, led by David Cameron, to co-ordinate efforts to stimulate growth across government. He also wants a “very significant” devolution of funding from central government to the cash-starved local enterprise partnerships – helping them lever-in more private sector co-funding and become more strategic – and for central government to prepare a “clear policy” for growing each sector of the economy.

It is likely Heseltine approved of the direction Gordon Brown and Peter Mandelson were moving in before the last election, shaping a modern approach to supporting industry – and unlikely he would have approved slashing support for wealth-creating businesses the way the coalition did in 2010, most infamously by removing a loan guarantee to Sheffield Forgemasters.

Heseltine calls for a new spirit of collaboration between public and private sectors:

“Only by working together and learning to understand each others’ strengths and capabilities will we succeed.”

As Heseltine puts it:

“Decisions on housing or transport, education or welfare support will have a far greater long term impact on our economic prospects than any form of direct support provided to business.”

Furthermore he “rejects” the lazy assumption in some quarters that “enterprise is a quality found only in the private sector”.

The other big theme of the report is about localising economic decision-making. After scrapping government offices in the regions, and regional planning and economic strategies, and abolishing the regional development agencies, Heseltine argues for a fresh emphasis on devolving powers and budgets, calling for £50 billion to be devolved from Whitehall to the 39 local enterprise partnerships to help them ‘transform’ their communities.

“Much more of the inspiration for our economy should be based on the strength and ambition of our cities and their communities. It was this local leadership that built our country in the first place.“

Heseltine, at pains not to sound disloyal on Today this morning, has nevertheless managed to produce a report sharply at odds with current government thinking. Vince Cable is probably chortling in his office.

So will his proposals find a chilly response in Whitehall? Undoubtedly, but Heseltine is used to that. As he records in his autobiography Life in the Jungle, Tarzan has long been an advocate of government intervention in industrial and urban policy.

When he was in the Department of Trade and Industry in 1979 and wanted to establish urban development corporations, he ran into similar opposition:

“Every manner of argument was paraded against my conviction that little was likely to happen without the dynamic and resource of government action coupled with private sector commitment.” (p. 212)

Heseltine’s bipartisan report will see the Labour frontbench find much to welcome. But for a government flat out of ideas about how to get the economy moving – and how to appeal to people in the vital political battlegrounds on the North and Midlands – Hezza’s report offers the blueprint for a major u-turn in approach away from the retro-Thatcherite posturing on deregulation and cuts.

But will ministers be smart enough to take it?