Les Ferdinand decries the existence of racism in the game, John Terry's lacklustre punishment and a lack of representation in football. 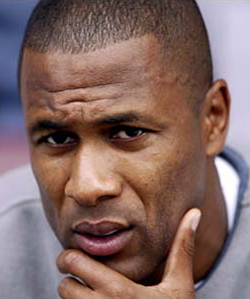 Last night saw the broadcast of a scathing interview with Les Ferdinand where he laid bare the extent of racism in football today.

He began by lambasting the existence of racism in international football, as we saw in the England Under-21 game in Serbia recently. In the interview, Ferdinand expressed concern at the number of nations that have a problem with racism in football.

This problem is not limited to Eastern Europe; there are serious issues in Western Europe as well.

Spain was recently fined by UEFA as a result of racist behaviour by their fans during Euro 2012. However, Spain’s football chief recently stated racism does not exist in Spanish football – this, despite numerous reports to the contrary, one such incident being the racist abuse of Mario Balotelli by a Spanish crowd.

Ferdinand said it was never as simple to punish a country like Spain:

“UEFA refuse to stamp stamp it out because I think the level of punishments they’ve handed out in the past, you know 16,000 Euro fines and 30,000 Euro fines and stuff like that are hardly likely to affect anybody in any organisation, in any FA.”

Later in the interview, Ferdinand went on to tear strips off of the FA for their response to John Terry’s racial abuse of his cousin Anton. He says he feels “let down” by their handling.

When asked about the pathetic four-game ban given to Terry and the eight-game ban handed to Luis Suarez, Ferdinand said:

“…the FA have turned round and said he’s getting an eight game ban. Now for me, if you racially abuse somebody that’s the minimum you’re gonna get, eight games.”

Ferdinand raises a very important issue here; the punishment given to Suarez was a precedent, but not one adhered to when it came to punishing Terry. Although there is vast debate as to whose offense was worse it is offensive to suggest Terry’s crimes warranted half the sentence Suarez’s did.

Earlier this week, the PFA announced a six-point plan to combat racism in the game and to try and prevent a split in the organisation.

In their announced plan there is provision for the “Consideration of stiffer penalties…”; the consideration of racism as ‘gross misconduct’ in coach and player contracts; and the speeding up of the process dealing with racist abuse claims.

Another key element to the plan is the effort to make the game more diverse at all levels.

This is something Ferdinand touched upon:

Clearly there are long-term issues in the game, like the ethnic diversity of the organisations governing football and the widespread existence of racism which is not just confined to an expectation of Eastern Europe.

Right now, however, it is disgusting to think Terry only got a four-match ban. Just four matches. And Chelsea’s attitude, standing by Terry, fining him what amounts to pennies for the defender, simply beggars belief. Whether or not he is a racist is something that may probably never be proved either way, but Terry was convicted of a racist offence by the FA and should have been given a much stricter sentence and made to properly pay for his actions.

What is also worrying, following the initial outcry, is the restriction of these stories to the sports pages and sports broadcasts, and lack of coverage in the political arena. This story has been largely ignored by MPs and was not brought up at PMQs. This is no longer a football story, it is story of a backward ideology that affects our civil rights; all journalists and politicians should give this issue the prominence it deserves.

We’ll leave you with the most chilling extracts of Ferdinand’s interview:

“When I played non-league football I got it unbelievably you know, I turned up at clubs and whole crowds were shouting. I was the only black player, and the whole crowd was shouting “shoot the n*****”. I mean that was at non-league level, I was like wow, this is unbelievable…

“Unless you experience racism you don’t really truly know, you really don’t know the effects, you know. I hear people on the radio, you know, it was alluded to on Adrian Durham’s show. I listen to it and I got so frustrated I wanted to call up, but then I’m calling up in anger and I don’t wanna be angry.

“You know people saying I get called “Scotch” this or “Irish” this or “ginger-headed” that and said hang on a minute you know. These people are missing the whole process, Stephen Lawrence got killed because of the same language that John Terry used to Anton Ferdinand – because of those same words he got killed, not for anything he’s done. You know, if you look through history people got lynched just because they were black, so the connotations of you saying to me “you black this, black that” is very, very different…

“Unless you’ve faced racism you’ll find it very difficult to have empathy for it. Some people have a lot of empathy for racism, but until you’ve been through it you don’t really understand it. I’d love to lend a hand if I can make things better, I mean it’s had to come to this unfortunately for everyone to stand up and take notice of a situation that’s beginning to develop again in football.”