Rob Marchant looks at just how free and fair the recent elections in Venezuela (won by Hugo Chavez) were, and how impartial the "election observers" were. 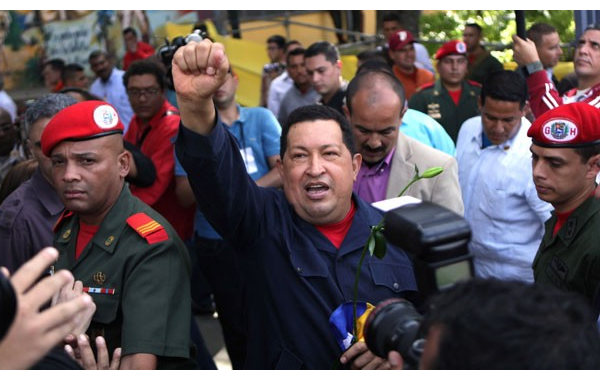 This morning, news came in of Hugo Chávez’s not entirely unexpected win in Venezuela’s presidential election. Now, today is not the time to review the man’s record in office on areas such as the economy, human rights or foreign policy, although these things are important – but, from this election result hangs an illuminating tale of the British left.

Despite Chávez’s regular use of state TV for campaign broadcasts, and concerns about voter intimidation, he has always gone out of his way to preserve at least an appearance of democratic choice to his electorate. The problem was, that with its hi-tech thumbprint identification, many voters were frightened away from using it, worrying their details might be used to find out how they voted (by the way, just think about how civil liberties groups would react to a national database of thumbprints in the UK).

This time, though, Chávez didn’t even try that hard to keep up appearances.

For the first time this election, there was no official, institutional election observation (EU, UN, and so on) other than the Union of South American Nations (UNASUR), a relatively new organisation rather dominated by Chávez and his friends among South American leaders. His supporters have recently become fond of quoting President Jimmy Carter of the Carter Centre, who praised their voting process. They fail to say other vital things outside the technical voting mechanism, such as media access, were criticised and remain unaddressed.

And, whether or not Carter was right, this time he was unwisely making a statement on Venezuela’s fairness without actually having sent observers; the Carter Centre, the only other 2012 invitee, rejected its invitation, sent only two months before the election, and no other institution was even invited.

It was also the first important election which he had a chance of losing (the only other which came close was a referendum about abolishing presidential term limits in 2007, but Chávez just kept right on going, until he got the answer he wanted two years later); no, this time it was UNASUR alone, and Chávez was left with a conundrum: how to lend credibility to elections in which it was sorely lacking?

And for the really hard questions, you cannot hope to know the answers: you have to use your gut from what you already know about the man.

Do we honestly believe this man would have gone quietly, had he lost? And that, with a government machine stuffed full of his own party members, he would not simply have supplied a different voting figure, had his state-of-the-art computer system produced an unpalatable one? The answers to these last two questions we will probably never know, but the fact that we cannot reasonably give a negative to them in all conscience leaves a highly unpleasant taste in the mouth.

And then there is the British connection. Labour MPs Grahame Morris and Diane Abbott, long-time Chávez supporters, have been out in Venezuela for the elections along with such reputable figures as, er, George Galloway and Jody McIntyre.

More interestingly, with no trace of irony, Abbott and Morris are going in the capacity of “official election observers”. Official observation, naturally, implies unquestionable neutrality. Diane Abbott even went to the trouble of tweeting me from Caracas that she “made a point of saying I wasn’t supporting a particular candidate”. But let’s look at that a little closer, shall we?

Abbott is patron of the Venezuela Solidarity Campaign an organisation which claims to be a friend to Venezuelan democracy but, strangely, does not seem to contain a single supporter of Chávez’s opponent, Henrique Capriles. One of its stated aims is “To defend the achievements of the Bolivarian Revolution”, i.e. Chávez’s political movement.

In any event, the state apparatus is so stuffed full of Chávez’s party members, and the vital democratic dividing lines between party and state so faint, that anything which supports the Venezuelan government effectively supports the party of Chávez and the man himself. In short, the organisation might as well be called the Chávez Solidarity Campaign.

It is also difficult to imagine, had Capriles won, that the VSC would not have immediately challenged the result and campaigned for his ousting. But that last part, of course, is merely speculation.

Even in the cognitive-dissonance-soaked world of the far left, it is difficult to countenance the idea these MPs can reasonably claim to be honest brokers, neutral to both candidates. At least Galloway is honest about his love for Chávez; “Chavez fears no-one but God” and “Viva Comandante!”, he tweeted this morning.

Finally, Capriles has accepted the election result because, frankly, he has no choice. You cannot choose to stand and then decry the process when you lose. He made his bed, and he has to lie in it, for the good of his country. But that does not mean the election has been free and fair.

Neither can we really even know if Capriles would have been a better president than Chávez. But he certainly deserved the opportunity for Venezuelans to find out.

The simple truth is you are either fully democratic or you are not democratic at all. There are no in-betweens. You cannot be “almost democratic”.

But even if, against all odds, you believe Venezuela have just had free and fair elections, it is simply astounding to find our own Members of Parliament expecting us to accept the story they were acting as observers of unquestionable neutrality.

106 Responses to “Comment: Labour, Venezuela, and the strange tale of “official observation””