In the wake of the October 20th protest, Ruwan Subasinghe discusses the legality of a General Strike. 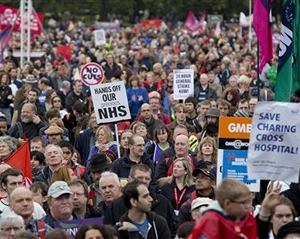 Perhaps the most poignant moment of the recent #Oct20 under-reported anti-austerity protest came when Unite’s Len McCluskey asked those present at the Hyde Park rally for a show of hands in support of a general strike. The resulting sea of raised hands was testament to the general ill feeling towards the government’s cuts agenda, a feeling perfectly illustrated by the RMT’s official slogan for the day: “March today, strike tomorrow!”

While some might label McCluskey’s emotive call to arms as mere posturing, it would be foolish to disregard the resolve of the union movement at this juncture.

The Prison Officers’ Association successfully moved a motion at last month’s Trades Union Congress calling on the TUC to investigate the “practicalities” of holding a general strike. The motion was crucially backed by the UK’s three biggest unions – Unite, Unison and the GMB – plus the ever-influential RMT.

Although ‘general strikes’ are not banned per se (they were for a brief period after the General Strike of 1926), strikes are only lawful when they are called in contemplation or furtherance of a trade dispute. A ‘trade dispute’ has to be between ‘workers and their employer’ and must concern the objects of collective bargaining.

As there is no positive or constitutional right to strike, the organisers of industrial action falling outside this ‘golden formula’ are unlikely to enjoy the statutory immunity from tortious liability (primarily inducing breach of contract).

Unlike the joint public sector walkouts earlier this year, which were organised by holding coordinated strike ballots, a general strike against government cuts would fall wholly outside the ‘golden formula’ as there would be no trade dispute between the workers called out and their employers.

Therefore, on a strict reading of the law, it would appear there isn’t much scope for the TUC or individual unions to call a lawful general strike. However, developments in international labour law and European human rights law may now mean the British courts have to revise their position on political protest strikes if they are to comply with their treaty obligations.

The International Labour Organization has consistently held that strikes of a political nature aimed at seeking solutions to economic and social policy questions fall within the scope of the principle of freedom of association enshrined in ILO Convention 87. Not only has the UK ratified this convention, it is considered to be a Core Convention binding all ILO member states by virtue of membership.

It can therefore be concluded British unions have a public international law right to call protest or general strikes.

This international law right can be ‘brought home’ via the 2008 European Court of Human Rights decision in Demir and Baykara v Turkey. In this case, the Court held (among other things) that in determining the rights covered in Article 11 (Freedom of Association) of the European Convention on Human Rights, deference must be given to ILO conventions and other international legal instruments which, incidentally, also permit political strikes.

The now maligned Human Rights Act 1998, which transposed the ECHR into domestic aw, places an obligation on judges to interpret domestic legislation in line with Convention rights. Therefore, as the authoritative Institute of Employment Rights has suggested, we now technically have a right to strike by virtue of the HRA.

While the UK courts may not be willing to imply the Article 11 right to strike (let alone the right to engage in political protest actions) into domestic law, they may be left with no alternative but to make a declaration of incompatibility with the ECHR. However, it is more likely that another European Court of Human Rights judgment will be needed before the domestic courts start applying our newfound right to strike.

Needless to say, much will depend on the courage of UK union leaders to call a general strike on such complex and indefinite legal grounds (read the brilliant IER report for a thorough analysis of the legal complexities). Not to mention the practical and financial implications of fighting through the legal system all the way to Strasbourg.

That being said, this could be a pivotal moment for the British labour movement. Watch this space…

31 Responses to “How lawful is a General Strike?”