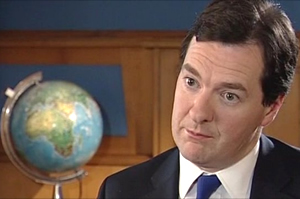 The latest upward revision of the GDP growth figures show the economy contracted by 0.4% in the second quarter, up from the second estimate of 0.5%. Despite this revision, the UK economy remains fragile, although some analysts claim to see signs of recovery.

Latest indicators suggest parts of the economy are picking up. Consumer confidence is slowly improving and employment has been consistently increasing for the majority of the year.

Latest figures show 236,000 new jobs were created in the three months to July; inflation has eased to 2.5% – lifting the squeeze on household incomes; and in July, both manufacturing and exports appear to be improving.

Taken together, if these trends continue they could make a positive contribution to growth – perhaps lifting the UK out of recession in the third quarter.

However, there are still major challenges ahead – public sector borrowing hit record levels for the month of August despite efforts to cap its growth; and inflation may resume its upward trend if the price of oil continues to creep upwards. This may have a dampening effect on much needed consumer spending.

Despite marginal improvements across a number of key economic indicators, the underlying trend remains clear – the UK economy is still struggling. For the past three consecutive quarters the economy has contracted although the latest indicators suggest there are positive signs ahead for recovery.

Even if the UK experiences an economic expansion for the remainder of the year it is likely to be slow and at times bumpy. In a bid to revive the economy and the worsening public finances, the government has announced a series of measures with the explicit aim of boosting short to medium growth.

In September, Vince Cable announced the latest measure to kick start growth – a British Business Bank. This initiative, backed by £1 billion of public funding, is expected to be up and running by 2014 with a remit to boost lending to small and medium sized firms. Manufacturing and high growth firms are expected to be the main recipients of this funding.

This is just one of a series of lending initiatives from the government. Previous announcements to encourage lending include Project Merlin, the National Loan Guarantee Scheme and the Funding for Lending Scheme (FLS). Launched in July, The FLS, run by the Bank of England, offers banks affordable loans at a rate of 0.25 per cent, with the hope the savings will be passed on to household and businesses.

The government wants to promote increased lending as historical trends suggest an increase in credit and the money supply tends to be followed by an increase in economic activity.

GDP declined by 0.4% in the second quarter:

Initial estimates in July 2012 put Q2 GDP growth at -0.7% and this was revised in August to -0.5%. However, latest revisions show the economy performed better than expected, indicating the economy contracted by 0.4% between Q1 and Q2. Most sectors were revised upwards – however the economy still remains fragile with output in construction dropping by 3.0% (revised upwards from 3.9%).

The number of people in employment in the latest three months to July 2012 increased by 236,000. However, only 102,000 – roughly 40 per cent – of those jobs were full time jobs, while part time work increased by 134,000. The employment rate stands at 71.2 per cent – the highest employment rate in more than three years – up 0.5 percentage points from the previous quarter.

The Olympics likely contributed to the boost in employment with London accounting for 91,000 of newly created jobs over the period. Private sector employment increased by 471,000 in June 2012 compared to March 2012 – more than offsetting cuts in public sector employment.

Unemployment dropped 0.1% in the three months to July 2012. The number of people unemployed for over a year rose to 904,000, the highest number since 1996. Between July 2012 and August 2012, the number of people claiming Jobseeker’s allowance dropped 15000 – the biggest monthly drop in more than two years.

Given the weak economy, the monthly improvements in unemployment continue to confound many experts.

Consumer confidence increased in September to its highest level since June 2011. This suggests people are slightly more optimistic about the economy – in particular, people feel their financial situation is likely to improve over the next 12 months. If low confidence has been hampering economic growth, this bodes well for the economy.

The purchasing managers’ manufacturing survey shows the industry shrank for the third consecutive month in September; similarly, the construction index remains below 50, indicating the sector is still contracting, however the index improved marginally from previous month.

The service sector indicator fell slightly in September; however, it remains above the 50 mark indicating continued growth in activity.

Consumer price inflation was down 0.1% from July dropping to 2.5%. The drop is primarily due to a fall in inflation in household equipment and maintenance, household services, and clothing and footwear. But was offset by the continued rise in the price of petrol. Inflation is 2% lower than the same point last year and only 0.5% above the Bank of England’s inflation target.

The volume of exports increased by 6.7% in the latest month with exports to non-EU countries rising by £1.3 billion. If this trend continues, exports could make a positive contribution to growth in the third quarter.

However, month-on-month changes can be volatile, looking at the trend over the longer run shows that the volume of exports excluding oil and erratic items increased by 0.9% in the three months to July.

The level of public sector net borrowing for August was £14.4 billion – slightly higher than this time last year. The underlying budget deficit for April to August this year is also higher than the year before.