Ed Jacobs reports on how agreement on the referendum question regarding Scotish independence is edging closer. 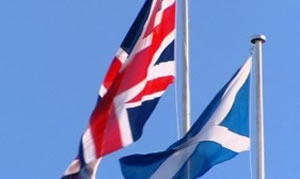 In January, David Cameron fired the starting gun on the referendum on Scotland’s future, calling for the issue to be addressed in a “fair and decisive” way through a legally binding and clear referendum. Ten months on and yet again the people of Scotland are being subjected by their politicians to a further debate around process rather than substance.

As the Scottish secretary, Michael Moore, today used his speech at the Liberal Democrat conference to explain progress has been made in discussions between him and deputy first minister Nicola Sturgeon – with lawyers now drafting formal proposals for David Cameron and Alex Salmond to sign off on – the SNP Leader has all but conceded defeat in his attempts to have a second option on the ballot paper.

Speaking to the LA Times over the weekend during a trip to America, which will include a visit to the forthcoming Ryder Cup (which Scotland will be hosting in the year of a Referendum), he commented:

“The UK government is clearly not willing to offer devo max or fiscal autonomy as an option.

“So I suspect… a lot’s going to depend on people who support economic powers for the [Scottish] Parliament but find that the UK government’s stopping them being able to move forward… I think people in these circumstances would want a change.”

His comments, however, were not universally welcomed, with shadow Scottish secretary, Margaret Curran, accusing the first minister of treating Scotland with contempt by providing such detail of government thinking to the American press.

“It would appear Alex Salmond has finally admitted defeat in his campaign for a second prize in the referendum but he doesn’t even have the decency to tell the people of Scotland first. First he tells his pal Rupert Murdoch his planned referendum date and now he tells the US press there will only be a single question before his consultation has been published.

“The first minister continues to treat the people of Scotland with utter contempt by refusing to be open about the referendum process and misrepresenting their views.”

Dubbing yet more debate about process as “unnecessary distractions”, the Herald this morning concluded of the first minister’s remarks:

“Talks between Nicola Sturgeon and Scottish secretary Michael Moore on the referendum format appear close to agreement but, with the Scottish government due to publish the responses to its consultation on the referendum next month, Mr Salmond risks appearing to have jumped the gun. By doing so in a US newspaper he provided ammunition for a charge of discourtesy which might stick to a normally adept politician.

“These are unnecessary distractions. The people of Scotland are keen to engage with the substance of how independence would be negotiated and exactly what it would mean and that is where debate should be focused, with the onus on the SNP to clarify the contentious issues.”

Criticising the first minister’s stance, meanwhile, chair of the pro-union Better Together campaign Alistair Darling argued a man from Mars would probably be able to establish the logistics of a referendum far quicker.

Speaking to Holyrood magazine ahead of the start this weekend of the Labour Party Conference, he observed:

“We are now in almost the tenth month of discussions about this and we still don’t have a date, the question or anything, really, and if a man from Mars arrived, he would probably find it fairly easy to come up with a date, a question and also a date within shouting distance rather than one which is the best part of two years away.

“I don’t think you can take anything for granted and I can see many reasons why Salmond would want to put off the day despite it being something he has wanted since he was a child.”

Meanwhile, as one question seems close to being settled, are splits now emerging within the ranks of the pro-union parties over the extent of new powers that could be provided to Holyrood in the event of a “no” to independence and, more importantly, how it could be achieved?

In February, David Cameron dangled the prospect of further powers being devolved to Holyrood in the event of Scotland rejecting independence, this despite Scottish Tory leader, Ruth Davidsonm having described the powers transferred under the recent Scotland Act as a “line in the sand” during her leadership campaign.

For the Liberal Democrats, meanwhile, having announced Sir Menzies Campbell’s Commission into Home Rule for Scotland will publish its findings next month, the party’s leader at Holyrood, Willie Rennie, today reiterated in his conference speech his belief further powers could be transferred to Scotland without a referendum.

6 Responses to “Agreement on a referendum question edges closer”