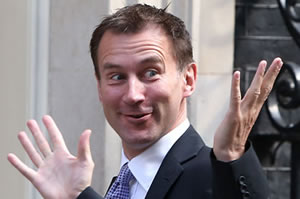 The now Leader of the House and former Secretary of State for Health Andrew Lansley famously has a gift for not hearing what people say to him and so may yet pitch up at Richmond House only to collide with the eager new boy and Leveson rabbit-in-the-headlights Jeremy Hunt.

As Michael Fallon, now Tinky to Grant Shapps’s Winky, admitted to Jeremy Paxman’s incredulous Hunt query, “obviously he’s got to bone up on the Health Service” – presumably with no orthopaedic pun intended, he had to acknowledge his interviewer’s namesake is less than experienced in matters relating to the hugely complex health brief.

So, as Hunt, Jeremy (never to be confused with Lord Phil, Shadow Health Lead in the Lords) puts his feet underneath the Lansley desk (and he probably won’t have to look far to find the LaLa scratched into the woodwork) what might be said to be his Five SoS Priorities?

Yes, I know there are plenty more than that, but let’s give him the Janet and John version to start with:

Dr Mark Porter for the BMA has said he hopes a new SoS “provides a fresh opportunity to work together” – and presumably improve the strained to the point of snapping relations between the profession and ministers.

A bit of a tricky one this; as shadow health sec Andy Burham has pointed out:

“Right now the NHS needs somebody who believes in its values and is ready to stand up for it. Instead the prime minister has given it to the man who reportedly tried to remove the NHS tribute from the opening ceremony of the Olympic Games.”

NHS Risk Factor: 7 (staff being keen to make the best of the situation).

Mike Farrar, the chief executive of the NHS Confederation, said:

“Top of Mr Hunt’s in-tray will be making sure the NHS is financially sustainable for the future and fit to respond to the needs of our changing population.”

For NHS staff this of course includes the knotty problem of taking on the £20billion Nicholson Challenge combined with the added costs (not purely financial) of Lansley’s chaotic overhaul including the internal infrastructure re-organisation involving the NHS Commissioning Board, re-vamped Monitor, Health & Wellbeing Boards, Healthwatch, the CQC, Senates, plus NICE troubles as well as CCGs in chaos.

Alarmingly there is a real likelihood this will not all be ready by April 2013 causing huge problems for CCGs (and by that token GP services) – even the new Emergency Planning and Resilience Response policy has been left floundering.

Where hospital management is concerned, despite the fact Circle almost persuaded the Today Programme they have got the whole thing sorted, they are operating under a massive deficit which, whilst ironically being profitable for Ali P and friends, is not so for patients, some of whom are already being shuffled off to other standard NHS hospitals. This is just the start.

Effective budget management within the DH is currently in freefall – and within the wider NHS, expert financial workers are haemorrhaging like a severed jugular, whilst proven practices are falling by the wayside and rationing is becoming de rigeur. ‘Nothing about me without me’ has turned into a hollow laugh as fire fighting has become the order of the day.

If the new SoS has any thought for patient care he would do well to pay attention and minimise the sell out , but as Harry Hill would say, “what are the chances…”

For both health workers and for Jeremy New-Boy the main challenge is surely also going to be keeping up with the pace of change – exactly how many balls can Mr Hunt juggle at any one time? Is he a dab hand at beach volleyball and rhythmic gymnastics, nimble on his toes, or does he prefer a lone jog without any balls at all?

For staff, priorities are trying to keep services intact in the face of the pace of cuts to frontline and back room services; A&E and hospital ward closures becoming fudged with the 49% private CAP; primary care changes with unpopular CCGs starting to reverse back into the shape of PCTs; £60billion CCGs leaving GPs out in the cold here; the public health challenge guided by McDonald’s and Coca Cola; staff cuts, wages cuts – and of course the gold rush of the private sector takeover which is already seeing patients reporting far more incidents for complaint.

Also not forgetting the huge elephant in the room – Adult Social Care and the need to give proper consideration to the Dilnot recommendations.

“New health SoS will need to ensure tariff reform is a priority so that integration around patients can help support independence at home.”

Which can of course be read two ways – independence not necessarily meaning actual access to care.

Govt. Risk Factor: 7.5 (he can probably do his homework – with extensions from the headmaster);

NHS Risk Factor: 10 (unless the media get on board and tell it as it is).

Ah yes – now we come to the ever-lovely Risk Register. Risk management is a key part of health service delivery, and as health commentator Roy Lilley has pointed out, the Commissioning Board has already published a ‘live, bang up-to-date risk register’, so it will be interesting to see how Hunt will pick up the ‘wriggle out of that one’ mantle.

To put this in context, Hunt’s shadow Andy Burnham has voiced immediate and genuine concern about Hunt’s suitability for the role – he is ‘co-author’ of Direct Democracy : An Agenda for a New Model Party (2005), published by the right-of-centre campaign group.

It backed “denationalising” the NHS, stating:

“Our ambition should be to break down the barriers between private and public provision, in effect denationalising the provision of healthcare in Britain, so extending to all the choices currently available only to the minority who opt for private care.”

He has openly stated the government “should have no role in NHS provision” – and has called the NHS “a fundamentally broken machine”. Hardly a USP for selling our NHS abroad.

Here’s the rub – for patients and staff the risk is one of losing our NHS and our nearest and dearest finding themselves without proper care; for Jeremy the risk is that he will find himself unable to keep up the dismantling whilst selling it to the public as a jolly good thing ready for the next election.

Govt. Risk Factor: How long is a piece of string?;

Which bring us to Jeremy’s priority number 5 – managing the boo-ometer.

He got off to the worst possible start on this front, booed at the Paralympics this evening just as George Osborne was on Monday.

As one desperate Tweeter asked:

“How can my dying father have been refused care in his final days on the NHS?”

We are led to believe Lansley’s failure was not one of process, but one of communication – however Hunt’s appointment brings with it a clear message: a man with no experience in health, an anti-abortionist whose behaviour in the mishandling of the BSkyB affair remains open to question and is the co-author of an anti-NHS pamphlet, has surely been tasked with continuing to turn the NHS inside out to become carrion for the rich pickers of the private health sector.

Amongst the many quips cast on Twitter this week, @welsh_gas_doc probably holds the most accurate prophecy:

“Lansley lost the confidence of the majority of the NH workforce – Jeremy Hunt starts off never having had it and is unlikely to gain it.”

Meanwhile, let us not forget that, just as Shakespeare knew so well, every tragedy holds within it scenes of comedy – and yes, Jamie Reed of the Shadow Team has already nailed the likely Carry On Up the Ministry scenario: With Jim Dale at the helm what can possibly go wrong?