A panel of experts has argued the referendum on whether Scotland should become an independent nation should be comprised of one clear question. 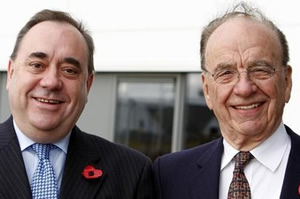 A panel of experts, commissioned by opposition parties at Holyrood, has argued the referendum on whether Scotland should become an independent nation should be comprised of one clear question.

Amidst an on-going belief Alex Salmond is keen on including an option for “Devo-Max” on the ballot paper, the commission, established by Labour, Conservatives and Liberal Democrats north of the border and led by Lord Sutherland of Houndwood, a former Edinburgh University principal, has argued the clarity needed in the result necessitates a single, clear question.

Outlining the committee’s conclusion, Ron Gould, who in 2007 was appointed to lead a review of the Scottish elections fiasco, explained:

“A second question makes it very difficult both for the voter to have a clear picture because there is a tendency to mix up the arguments as the parties do pros and cons.”

“Every people has a right to self-determination, but that right can only be exercised if they are asked a clear and unequivocal question.”

Whilst it did not argue the SNP’s proposed wording of a referendum question – “Do you agree that Scotland should be an independent country?” – was not necessarily biased, the panel did come up with its own suggested wording, calling for a simple statement for voters to agree or disagree with:

“Scotland should be an independent state.”

“In other words, we’re looking for an agreement on what is clear, understandable, decisive, unbiased and fair, and it should be seen to be all of those things.”

Over the weekend, polling for the Mail on Sunday found 53% of Scots favoured a single question against 41% who favoured the idea of a second option to choose from.

“This independent body of work represents a real opportunity for all sides of this debate to reach a consensus on one of the fundamental parts of the referendum. The question has to be fair in order that the result properly reflects the will of the Scottish people and by endorsing the question put forward by the expert panel this ensures that no advantage can be gained from either side.

“I hope that we reach agreement with the first minister on this at the next meeting of the party leaders and move on to the real debate about our country’s future.”

“Surely Alex Salmond will agree his referendum on separation must produce a clear result and that is precisely what the expert panel’s simple, unbiased question was devised to deliver. It is obvious from the panel’s excellent work that a referendum is only effective when there is clarity on both the issue and the question, so this must rule out any notion of a further question on devolution which would produce nothing but confusion.

“The people of Scotland face the most important vote in 300 years and I am very grateful to the panel for producing a clear, fair and decisive single question, and I urge the first minister to accept and adopt the findings.”

Scottish Lib Dem leader Willie Rennie, meanwhile, argued the report was the only basis to reach a conclusion on the referendum:

“So the proposal from this expert group will help us all reach a conclusion to this matter.”

And whilst pledging the government would consider the report’s findings, a spokesman for Bruce Crawford, the cabinet secretary for parliamentary business and government strategy, sought to make party political points, saying of the findings:

“A key point is that the panel’s conclusions differ fundamentally from the views previously expressed by all three opposition parties. Significantly, there is no reference to the United Kingdom in this proposed question, unlike in the poll commissioned by the anti-independence Better Together campaign as recently as May, and in stark contrast to the statements of all the opposition parties.

“That is appropriate, because people understand that the Queen will be head of state of an independent Scotland, and therefore Scotland and England will be united kingdoms.”

As we head towards the historic vote on Scottish independence, perhaps we can all agree on one thing at the very least: the question put to the voters in the autumn of 2014 must be utterly clear in its meaning and intent, and there cannot be any suggestion that it favours either side of the argument. Only with this as a given can Scotland hope to have any kind of meaningful debate between now and polling day.

Without a degree of clarity about the question, and general agreement about its neutrality, there is little chance that the referendum campaign could begin to examine the very real issues at stake on their own terms. It would also be impossible to have a campaign conducted in good faith and without rancour. Which is why the work done by a triumvirate of eminent academics and electoral experts headed by Lord Sutherland of Houndwood (better known as Stewart Sutherland) is most welcome in the Scottish political debate.

Their conclusions, published yesterday, will go some way to dispelling much of the distracting smoke from the referendum battleground, enabling us all to see the real issues more clearly. When the Scottish government published its preferred wording for the referendum question earlier this year, there was praise for its brevity and simplicity – but there were also concerns that the phrasing could make voters more likely to plump for independence. Among experts in this field there now seems to be some agreement that this is indeed the case.

Faced with this view, the Scottish government should avoid the temptation to be drawn into a prolonged and sustained defence of its initial preferred wording. For the reasons expressed above, this would be ultimately futile and self-defeating.

Similarly, welcoming the report’s publication, The Herald sought to make comparisons between this and the referendum on the Good Friday agreement in Northern Ireland, stating:

It is worth recalling the 1998 referendum in Northern Ireland on the Belfast Agreement. Voters were asked:

“Do you support the agreement set out in Command Paper 3883?”

Transparent it was not, and yet nobody argued that the electorate was unable to express its views clearly, or failed to understand what it was being asked.

Yesterday, the expert panel commissioned by pro-Union parties to examine the best phrasing for the question in Scotland’s independence referendum delivered its verdict.

Instead of the wording proposed by the Scottish Government, “Do you agree that Scotland should be an independent country?”, the panel suggested voters should be presented with the more neutral question:

“Should Scotland become an independent state?”

And required to tick a box marked “I agree” or “I do not agree”. The panel’s wording is simply more balanced.

First minister Alex Salmond’s “do you agree that…” was loaded. Psychologically, it implied the broad consensus lay in a given direction, and the anonymous voter was invited to concur. There is no good evidence that the wording of a question is influential in the outcome of a referendum. When the panel examined 74 past referendums from around the world, loaded questions appeared no more successful than more neutral phrasing. In fact, the evidence suggests a question which appears to prejudge the issue may be damaging to the interests of those supporting it.

This makes sense. For every impressionable voter steered towards a “yes” vote by an unbalanced question, there may be others who would react with anger and resistance, and cussedly vote “no”. The lesson from Northern Ireland is that voters well understand what they are being asked to decide on. More than anything this is an issue of perception, and it is here that the question matters. All parties are agreed that a clear and decisive result is essential, leaving aside for the moment the matter of whether there would be a second question on maximum devolution.

The SNP’s proposal so far has the smack of a phrasing geared for controversy, a choice intended more as an initial bargaining position than as a final submission.

The Electoral Commission has made it clear that it will only consider a form of words proposed by the relevant government, although whether that is the Scottish or UK administration has still to be decided. But the wording proposed yesterday is sensible and a useful contribution.