David Cameron has criticised state school teachers for not doing their bit for school sport. 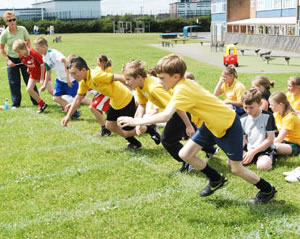 That’s right, the prime minister is blaming our hard working state school teachers, not George Osborne’s slashing of funding for school sport, the huge reduction in the number of hours dedicated to school sport, and Michael Gove’s selling off of school playing fields – information dragged out of the government this week through a Guardian Freedom of Information request.

• By 2010, the average secondary school offered 25 different sports – including Olympic sports such as judo, cycling and badminton, where there has seen so much progress in recent years;

• There has been a 60% reduction in the number of hours dedicated to organising school sport;

• Thirty seven per cent of school sports partnerships have disappeared; and

• The sale of more than 20 school sports fields has been approved by the education secretary in the past two years.

This week, it also emerged that targets requiring all schoolchildren to take part in at least two hours of sport every week have been dropped as part of an overhaul of physical education.

• Without greater provision and resources, state schools will struggle to close the gold gap 6 Aug 2012

• The two faces of the Tories on sport: Embracing the Games while closing swimming pools 18 May 2012

• Priced out of the playground: Tory Wandsworth to charge kids to play 12 May 2011

“If the only problem was money you would solve this with money. The problem has been too many schools not wanting to have competitive sport, some teachers not wanting to join in and play their part.

“I had a very privileged schooling and all the rest of it, but the reason why aged 7, 8, 9, 10 I got into cricket and football and rugby was because I had teachers who, as well as teaching different subjects, gave up their time to go and coach sport and to coach children.

“All those athletes we’ve been seeing – when you ask them what was it that helped you, a lot of them will say, ‘I had a great geography teacher but he also enthused in me a passion for running’.”

Once again, a privileged right-winger going on about attitude and blaming state schools for being less successful than private schools at producing gold medallists – and ignoring the issue of investment and opportunity. As Left Foot Forward explained earlier this week, without greater provision and resources, state schools will struggle to close the gap.

As West Ham boss Sam Allardyce pointed out last year, if blame is to be apportioned for non-sports specialist state school teachers not devoting more extra-curricular hours to sport, it lies much closer to home for Cameron:

“Since Margaret Thatcher stopped teachers being paid extra money for coaching sports after school, all sporting activities have diminished on a competitive basis… Until we wake up and realise how important school sport is to our kids we will never repair the damage.”

And as Andy Burnham tweeted:

“After-school matches dried up in 80s. School sports co-ordinators were instructed to revive them.”

Cameron and his chums can blame state schools all they like – but if it really is all about attitude and not money, resources and opportunity, why doesn’t his beloved Eton sell off all its playing fields, courts, pools, courses, lakes…