Even assuming that private sector jobs were created as a result of holding back public sector pay, the economic cost would be £2.7bn or 0.12% of GDP per year.

.
Alice Hood is a senior policy officer at the TUC where she works on public services issues

A report published today by the TUC debunks the government’s arguments for localising public sector pay and shows the devastating impact it would have, costing the economy up to £9.7bn per year. 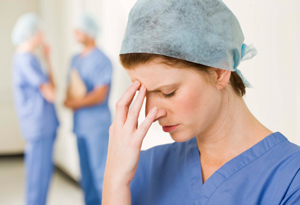 We hope the results will prove the final nail in the coffin for this discredited and damaging idea. The New Economics Foundation (NEF) report for the TUC analyses the government’s arguments and the latest academic evidence.

It finds that the differences between public and private sectors mean that pay structures are ‘barely comparable’ (more on this here), that private companies do use national pay structures, contrary to claims of great local variation (more here) and most importantly that the ‘crowding out’ concept is highly contested and not supported by the evidence.

The researchers modelled the economic impact of localising public sector pay under a series of scenarios.

These ranged from an approach which accepts the government’s argument that crowding out exists, to the opposite end of the spectrum with no crowding out at all. They also factored in how reductions in disposable income would affect trade between regions.

The exercise found crushing economic costs in each region of England and in Wales and across the economy as a whole.

Even in the ‘best-case’ scenario, assuming that private sector jobs were created as a result of holding back public sector pay, the economic cost would be £2.7bn or 0.12% of GDP per year.

Contrastingly, in a scenario where there is little or no private sector employment response to a fall in public sector pay the annual net costs at a national level would reach £9.7 billion, equivalent to 0.43% of UK GDP.

The table below shows the best and worst case scenarios for each of the English regions and Wales: 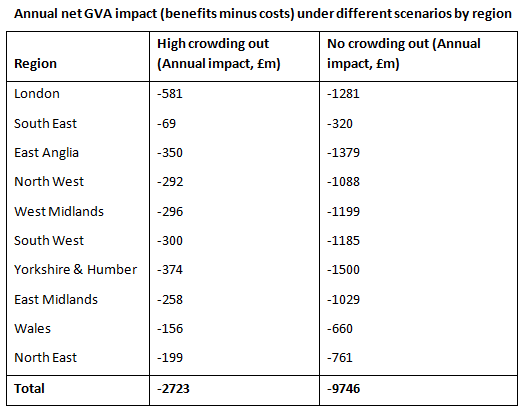 The Pay Review Bodies have been investigating the issue over the past six months and three of them including the NHS body will report to the Treasury this week, with a fourth (the School Teachers Review Body) reporting in the autumn. But their brief focuses on issues around the broad design and implementation of such a policy, not the economic impacts.

Politicians from all parties have spoken out on the issue in the past few months, concerned about the economic impacts of taking more demand out of the struggling economy and the unfairness of paying nurses and teachers less simply because of where they live and work.

More recently, the government has rowed back a little, saying “there will be no change unless there is strong evidence to support it and a rational case for proceeding”.

Today’s report shows the strength of the case against. It’s time for them to put a stop to this destructive idea.