Michelle Obama today greeted the US Olympic team in Docklands with an inspirational speech to kick off the final countdown to the Games.

Michelle Obama today greeted the US Olympic team in Docklands with an inspirational speech to kick off the final countdown to the Games. 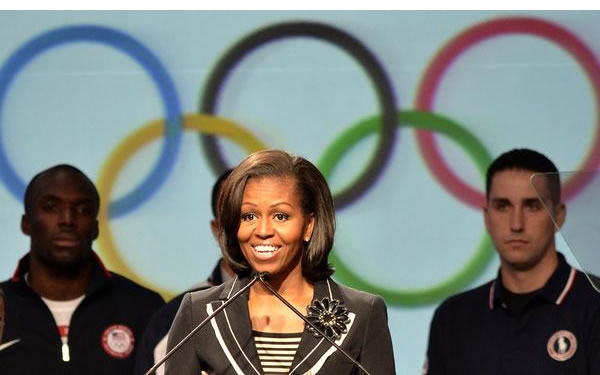 In stark contrast to Republican Presidential candidate Mitt Romney’s gaffe-strewn UK tour, the First Lady steered clear of insulting her hosts and talking down the Games, recalling her own memories and the story of her father, oozing a love of sport and the Olympic spirit, telling Team USA to:

“Try to have fun, try to breathe a little bit, but also win, right?”

She told the group that some of her fondest memories in sports stemmed from watching the Olympics on television. She also shared the story of her father, who was athletic and contracted multiple sclerosis “in the prime of his life”.

“He retained his love of sports, truly,” Mrs Obama told the athletes. “And the Olympics was a special time for him to watch amazing athletes of all abilities compete on the world stage. So these games especially affected our little house on the south side of Chicago. Every few years, these games bring pride, excitement and wonder to millions of people around the world. And that must mean so much to all of you.”

The breakfast took place at the University of East London, where the U.S. Olympic Committee has established a full training facility that will host hundreds of athletes during the games. Among the Olympians in attendance: Two-time fencing gold medalist Mariel Zagunis, who was chosen by U.S. athletes to carry the nation’s flag into the opening ceremony, along with the U.S. women’s basketball team and members of the track and field squad.

“Being here is otherworldly for me,” Mrs Obama said. “I am still so inspired.”

Before leaving the States, she made clear just how much the occasion means to her:

“Leading our nation’s delegation and traveling to London is truly a dream come true… If anybody had asked me when I was 10 or 11 or 20, or actually 40, whether I would be doing this, I would have bet not. Some of my fondest memories when I was young and not so young involved watching the Olympics on TV.”

Mrs Obama, leading the Presidential delegation, is taking her “Let’s Move” anti-obesity campaign to Britain, highlighting the enormous health benefits of sport and exercise – one of the many legacies of London 2012.

As the LA Times reports:

The first lady will take her Let’s Move anti-obesity campaign to the U.S. ambassador’s residence Friday, where 1,000 American and British children will be put through their paces at sports stations and get a chance to meet athletes including soccer great David Beckham.

She has dubbed Saturday a Let’s Move Olympic Fun Day and is encouraging communities in the U.S. to arrange fitness events through Meetup.com.

The Olympics opening ceremony takes place at 9:00 tonight, with the Games running till Sunday August 12th.