David Cameron rolled out the red carpet for François Hollande’s visit to the UK yesterday, in his official visit as French President. 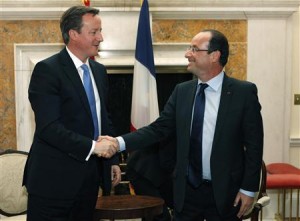 At a press conference yesterday, Hollande stated he does not believe the UK intends to block what the eurozone countries are trying to achieve.

“We need to conceive a multi-speed Europe with each country running at their own pace, taking what they want from the European Union with respect for the other countries.”

Cameron said France was an essential partner to Britain as he has difficult decisions to make about if and when to hold a referendum on the UK position in Europe.

He is trying to hold off until 2015, but faces growing calls from backbench Tories as well as the general public to hold a referendum in this parliament.

The British public are unlikely to get an ‘in or out’ question, though – it seems more likely the UK’s relationship with Europe could be called into question, with the UK wanting to repatriate some powers back from Europe to gain more sovereignty. Hollande’s call for a multi-speed Europe, would then give the UK the breathing space to work to a different beat to the rest of the EU.

Hollande and Cameron also have different ideas on how to get their countries back on the path to growth, with Hollande planning to hit the bankers and the wealthy and Cameron favouring austerity and public sector cuts. It was a short 90-minute lunch meeting, with Syria and defence also on the agenda. Hollande also had an even shorter 30-minute meeting with the Queen.