This year, the Gates Foundation and Melinda Gates in particular, are focusing their considerable political and financial weight on tackling access to family planning for women in the developing world – an area that hasn’t had the degree of attention it deserves recently. 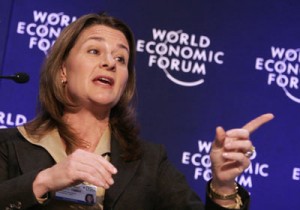 There is much to be applauded in this work and their partnership with the British government to increase access to family planning services for some of the world’s poorest women.

Equality and human rights for women – the rights and freedoms we have fought so hard for here – are still distant goals in too many places.

Fixing this means tackling a complex set of inter-connected issues including education, economic opportunity, social and cultural attitudes. And yes, it is about access to family planning too.

While this is complex and challenging, there are success stories that we can learn from and build on. And a vital first step will be recognising that these efforts must sit within the broader project of supporting women’s empowerment and rights.

Progress has been closely linked to other improvements. Higher rates of girls’ education, for example, mean women know more about sexual and reproductive health enabling them to manage their health and make better decisions. The number of women in paid employment is continuing to grow and helping women build their individual and collective ability to call for the changes and rights they want.

But social and cultural beliefs as well as a poor view of a woman’s status and place in society throw up roadblocks to accessing healthcare or contraception for some women even when it is available. Where women lack status and economic freedom, they are also less likely to be able to choose for themselves to seek medical help.

The decision, particularly where it costs money, will generally be up to their husband and as a result of their low status, their healthcare needs may not be the top financial priority.  In this context, getting men involved in family planning and driving gender equality is vital.

At least 300,000 women die every year due to complications from pregnancy or childbirth – not to mention the millions who face illness or long-term disability. The tragedy is that most of these could be avoided with basic healthcare and even more averted if more women had the freedom to choose when or if they have children.

Despite some success in reducing maternal mortality and increasing the use of contraceptives, pregnancy and childbirth remain the leading causes of death and disability for women in the developing world and 222 million women still don’t use modern contraception.

Inequalities between and within countries remain too high – poor women in Peru for example are twice as likely to die from pregnancy-related causes as their wealthier counterparts and 99% of maternal deaths are in the developing world.

We must put an end to child marriage not just because it is morally reprehensible but also because maternal mortality rates for girls who give birth between the ages of girls 10 to 14 are four times as high and 15 to 19 are twice as high.

Violence against women and girls – domestic violence, rape, sexual harassment, female genital mutilation and restrictions on mobility – takes away even more of their choices.

Real equality, real empowerment for women is the product of more than just reproductive rights. Much more still needs to be done in promoting and protecting women’s rights – not only mothers’ rights – but also economic, political and social.

It is by changing these things that women will have the freedom to make the reproductive, and other, choices they want.
This summit will try to tackle a concrete problem – access to contraception – but to do this effectively it must also tackle the broader context in which women in the developing world live their lives.

It’s even more unfortunate that the government chose to hold this summit on World Population Day which can imply some slightly unpleasant overtones.

This means no longer painting women simply as victims of their circumstances but instead as capable of and willing to take charge of their own empowerment.

Women are not just “helpless victims seeking UK NGO help” but arbiters of their own fate and, as donors and leaders in international development, we should be helping to make that argument not continuing to portray them as weak and dependent.

The work being done by international institutions such as UN Women in this field is vital and shows what we can hope to achieve.

Despite being under-funded, under-resourced and having just recently been established, UN Women have managed to support the creation of stronger policies or laws to advance gender equality in 50 countries and helped to increase the number of women in Parliament in Morocco from 10% to 17%. It is work like this that will help overcome the barriers to women’s freedom and equality.

The global financial crisis of 2008 and subsequent economic slowdown is already pushing women’s rights down the agenda in the face of seemingly more pressing needs. The World Bank estimates that the global economic crisis pushed 53 million more people into poverty in 2009 alone.

As women are disproportionately poorer than men this has a serious impact on any progress on women’s empowerment. Putting our political and financial weight behind some of the poorest women in the world is not only right, it is imperative.

Women and girls must be at the centre of our development work – not least because progress so far on the MDGs is slowest on those that rely on improving the status women – and this means doing more than helping with family planning.

It means helping to build the capacity and architecture for women to empower themselves.