.
Revised figures show the UK economy has so far contracted by 0.7 per cent in the second dip of the double-dip recession, but the latest monthly data suggest there will be a further fall in real GDP in the second quarter of this year.

Even if the economy starts to recover in the second half of the year, which most forecasters expect, the cumulative loss of output over three quarters of contraction (the last quarter of 2011 and the first two of 2012) could amount to 1 per cent. This increases the risk the UK will lose its AAA credit rating because weak growth leads to increased borrowing.

Already in the first two months of the 2012/13 fiscal year, the government has borrowed £4 billion more than in the same two months of 2011/12 (in underlying terms). Evidence from other countries, particularly the US, suggests a credit downgrade would have little effect on yields on government bonds, and thus little economic impact.

Even if it did, the Bank of England could neutralise the effect through an increase in quantitative easing. The bigger effect is likely to be on the reputation of the chancellor, who pledged to preserve the AAA rating. 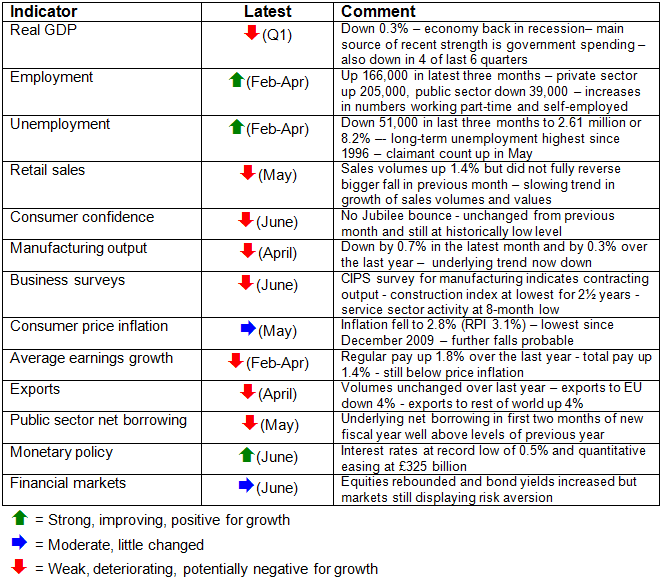 One set of official figures shows the UK economy is back in recession, with real GDP falling by 0.7 per cent between the third quarter of 2011 and the first of 2012. Another set says the private sector created 205,000 jobs over the three months to February to April. Can they both be right?

The employment data are generally regarded as reliable and not subject to significant revision but one possibility is that the GDP data are wrong. GDP data do get revised, often quite significantly (though historically this has been just as likely to reveal slower rather than faster growth).

A significant proportion of the recent increase in employment is among the self-employed and the output of this is a group may be hard for statisticians measuring GDP to capture in their surveys. On the other hand, many of these self-employed people are working part-time and it could be that they have set up in business having despaired at finding full-time employment as an employee. If so, their earnings are likely to be very low, and so they will not be adding much to GDP.

If both the employment and GDP data are right, then productivity growth, in terms of output per employee, in the UK has slumped. This would be unusual, but cannot be ruled out completely. Throughout the last four years, there is plenty of evidence of firms and employees working together to find ways of avoiding redundancies, such as part-time working and pay freezes.

Real earnings in the UK have been extraordinarily weak throughout this period. The net result is that some firms have been able to hold down costs without making redundancies. If so, the bad news for the unemployed is that when demand and output pick up, the first effect is likely to be people moving from part-time to full-time working.

1. GDP down 0.3% in first quarter: The ONS has rebased and re-estimated its GDP data. The latest figures show the 2008/09 recession was not as deep as previously thought, though GDP did fall 6.3% from peak to trough. However, the second dip now appears to be deeper – GDP having contracted by 0.7% between the third quarter of 2011 and the first quarter of 2012 (and there could be a further fall in the second quarter). The fall in GDP in the last two quarters is more than fully explained by cuts in inventory building, while the only consistent source of strength has been government spending.

2. Employment up – private sector creating many jobs: Employment in the latest three months, to February-April 2012, was 166.000 higher than in the previous three months. Private sector employment was up 205,000, while public sector employment fell by 39,000. However, much of the growth in employment was in part-time working and self-employment. The number of employees working full-time was up just 27,000 on the quarter and is down 122,000 over the last year. There are a record number of people working part-time who say that they want to work full-time and it may be that a large part of the increase in self-employment is also involuntary. 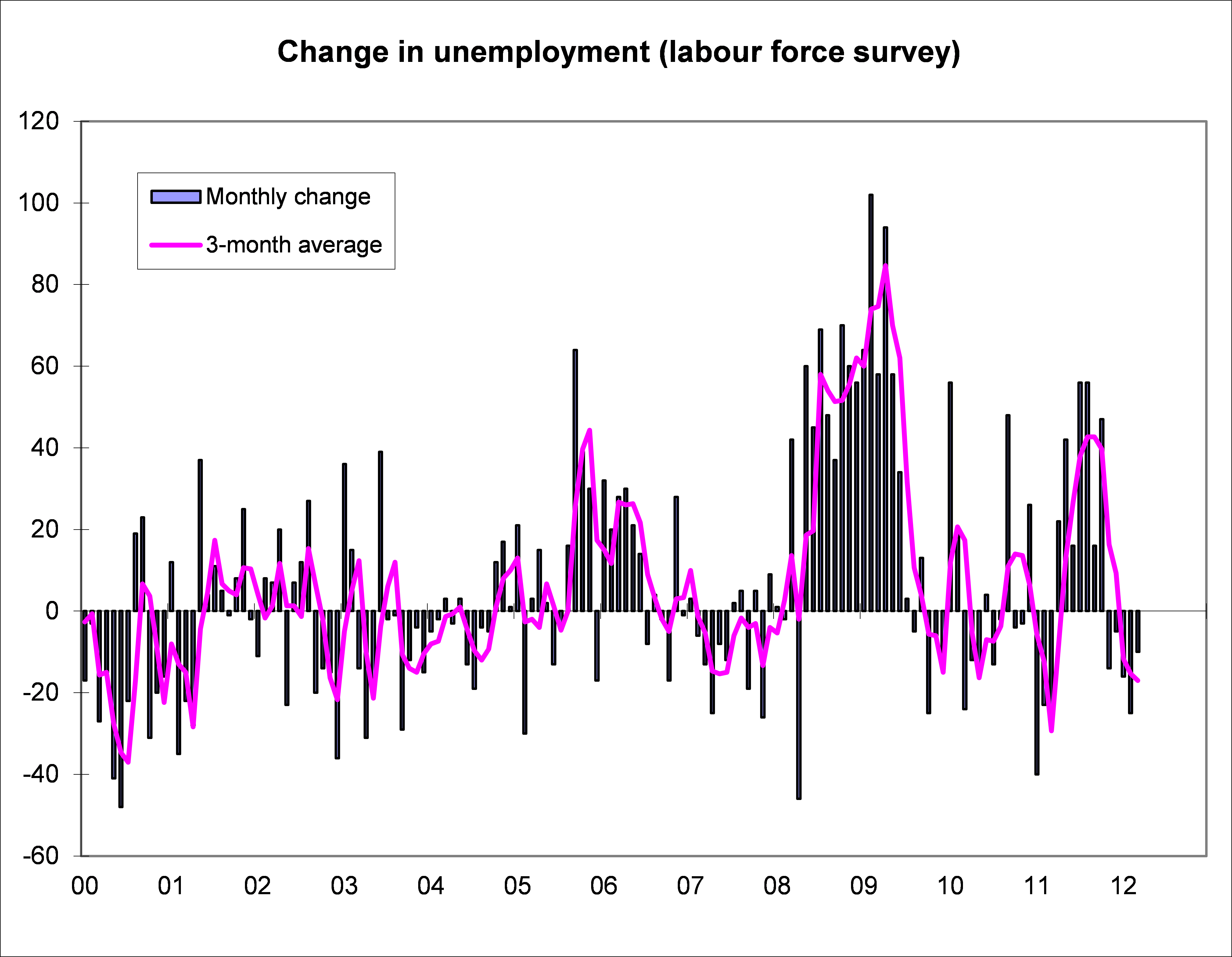 3. Unemployment down: On the Labour Force Survey measure, unemployment fell by 51,000 over the latest quarter. As a result, unemployment in the three months to February-April was down to 2.61 million, or 8.2% of the labour force. This is confounding forecasters, who thought unemployment would continue to increase despite failing to predict the return to recession. Long-term unemployment increased by 30,000 to 886,000 – its highest level since 1996 – and could top 1 million before the end of the year. The claimant count measure of unemployment increased by 8,100 in May. See Figure 1.

4. Retail sales rebound – partially: The volume of retail sales jumped by 1.4% in May, but this followed a 2.4% fall in April. Sales have been affected in recent months by good and bad weather and by panic buying of petrol, but looking through all the noise it seems the underlying trend rate of increase has slowed. The same is also true of growth in sales values, suggesting the prolonged squeeze on earning growth is finally beginning to have an effect. 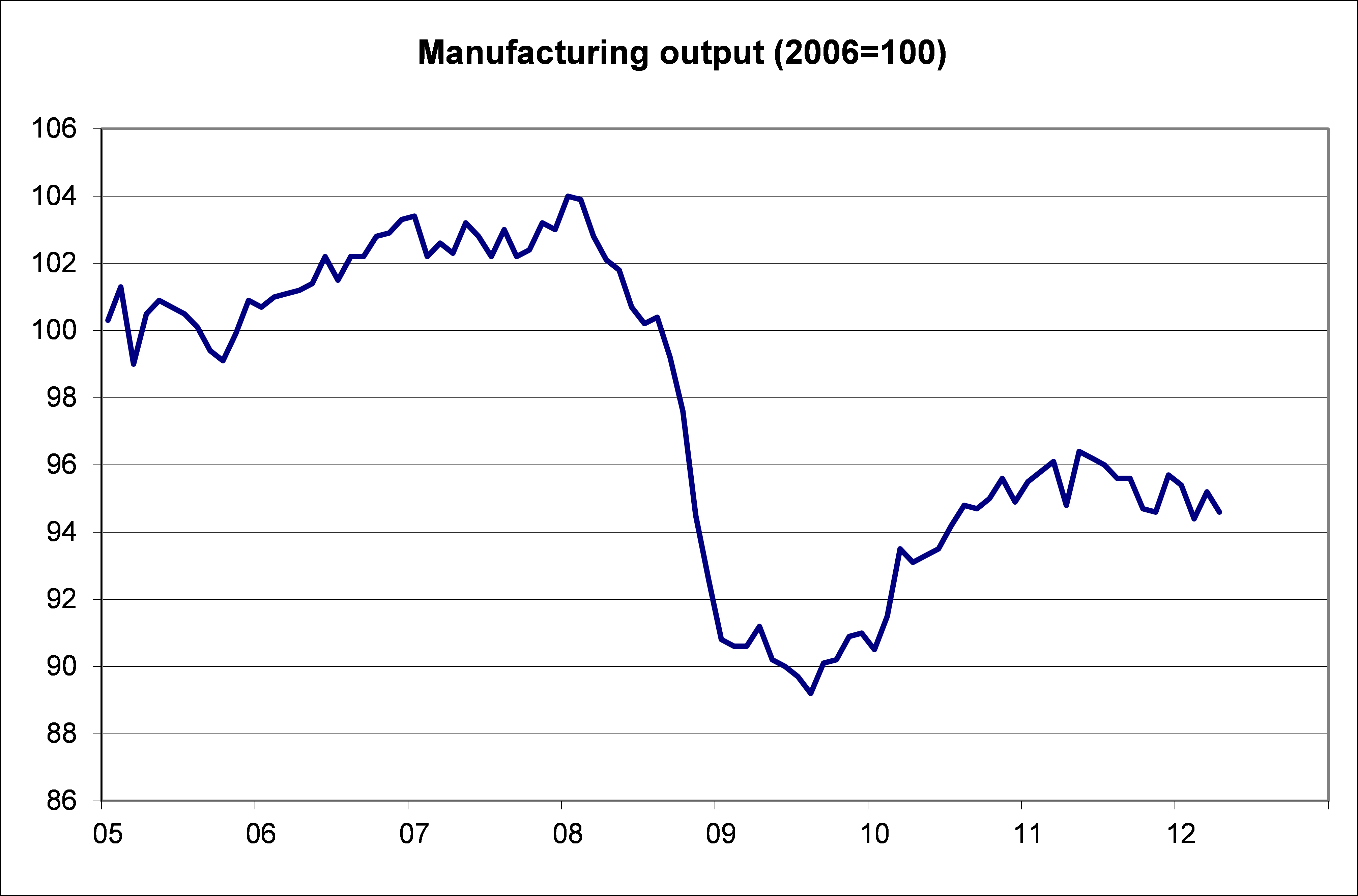 7. Business surveys weak: The CIPS purchasing managers’ index for manufacturing jumped from 45.9 to 48.6 in June but still indicates contracting output. The second quarter was undoubtedly weaker than the first. The construction indicator fell below the crucial 50 level, suggesting output is declining; it is now at its lowest level for two and a half years. Meanwhile, the services index fell by more than expected to an 8-month low of 51.3. Although this suggests output in the sector is still expanding, weaker orders point to further weakness in coming months.

8. Inflation down to 2.8%: Consumer price inflation fell from 3.0% in April to 2.8% in April – its lowest level since December 2009. Last year’s big increases in food and petrol prices are now dropping out of the calculation. Inflation is likely to remain within 1 percentage point of its 2% target for the remainder of 2012 and should fall further in coming months.

9. Earnings growth sluggish: Average earnings increased by 1.4% in the year to the three months ending in April, still well below the rate of price inflation. Regular earnings, which exclude bonuses, were up 1.8% in aggregate. In the private sector, regular earnings were up 2.1%, but in the public sector by only 1.2% (and 0.8% excluding financial services). Earnings are increasing most rapidly in finance and business services. See Figure 3. 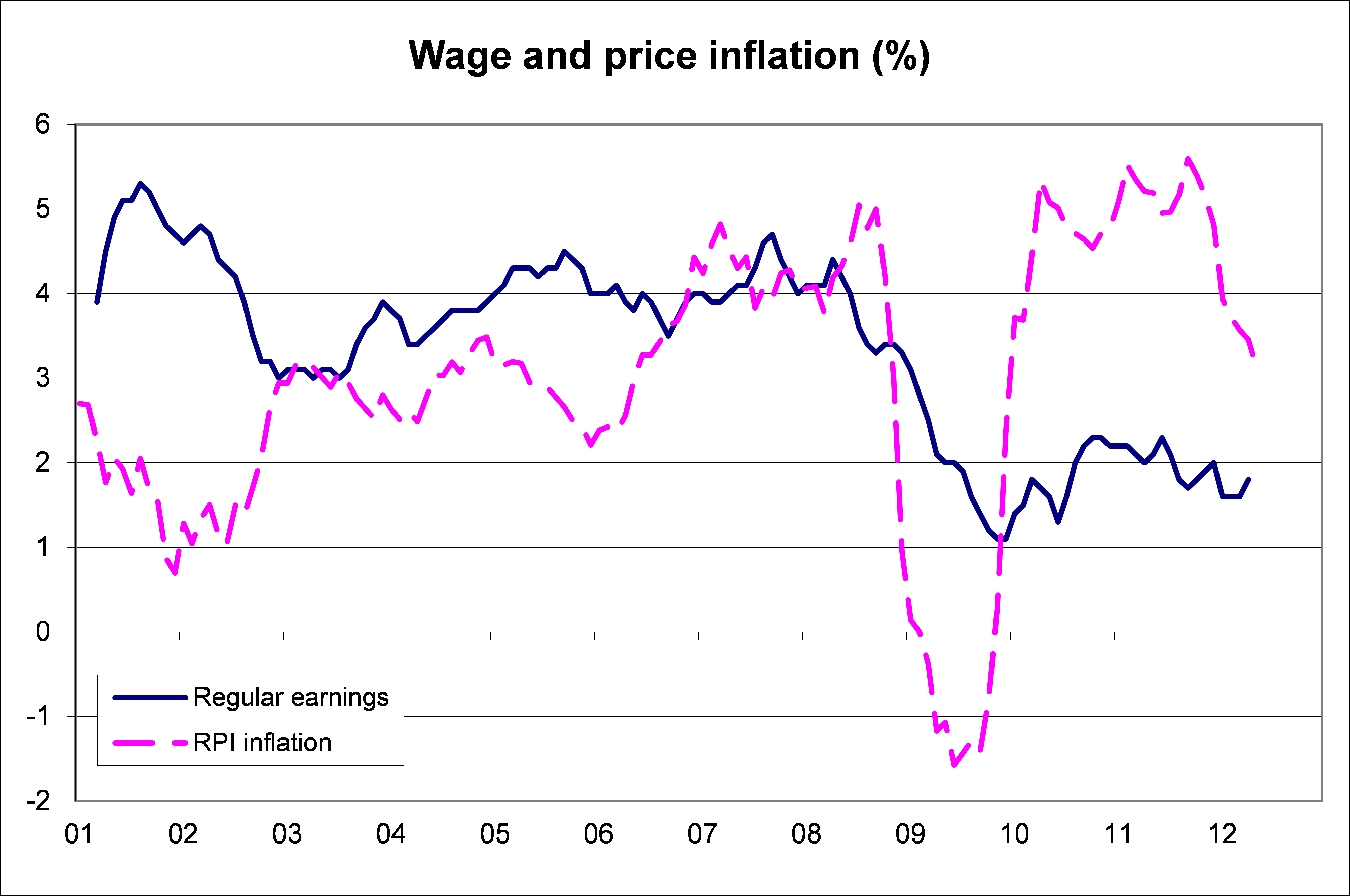 10. Export growth hit by euro zone crisis: Export volumes (excluding oil and erratic items) were unchanged in the year to the three months ending in April. Exports to the rest of the European Union fell by 4%, with the weakness concentrated in recent months, which suggests the euro zone crisis is starting to have an effect on the UK economy. Exports to the rest of the world were up 4%.

11. Government borrowing higher in May: Public sector net borrowing (excluding financial interventions) was almost £3 billion higher in May than a year earlier. Excluding the transfer to government of £28 billion as part of changes to the Royal Mail pension scheme, borrowing was also up in April, suggesting the effects of return to recession on the public finances are more than offsetting the government’s efforts to cut borrowing.

12. Interest rates remain at 0.5%; QE at £325 billion: The Monetary Policy Committee left interest rates at 0.5% in June and the scale of quantitative easing (QE) at £325 billion. However, the vote against a further increase in QE was 5 to 4, and the possibility of a further easing of monetary policy in the next month or two has increased.

13. Financial markets remain risk averse: The equity market reversed some of its recent losses in June and bond yields edged a little higher (though the 10-year yield remains comfortably below 2 per cent). Meanwhile, sterling was little changed against other major currencies. Financial markets are being driven more by developments in the euro zone than by what is happening in the UK.