Balls: How much longer must we wait, and how much more damage must be done, before George Osborne finally does the most important u-turn of all?

.
The International Monetary Fund (IMF) has issued yet another stark warning to the chancellor, saying that current economic policy in the UK will not be able to “absorb significant slack in the economy”. 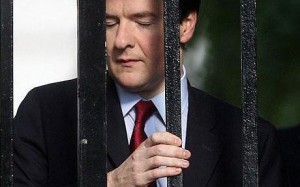 Looking ahead, the economy is expected to grow modestly, but with current policy settings the pace will be insufficient to absorb significant slack in the economy, raising the risk of a permanent loss of productive capacity.

Demand support is needed. More expansionary demand policies would close the output gap faster and reduce the risk of hysteresis… The planned pace of structural fiscal tightening will need to slow if the recovery fails to take off even after additional monetary stimulus and strong credit easing measures.

This criticism will no doubt damage confidence in George Osborne, especially as it follows the IMF downgrading its UK growth forecast three days ago.

The article went on to give multiple examples of previous criticisms the IMF have made regarding UK economic policy:

“If activity were to undershoot current expectations and risk a period of stagnation or contraction, countries that face historically low yields (for example, Germany and the United Kingdom) should also consider delaying some of their planned consolidation.”

“Fiscal easing and further use of the government’s balance sheet should be considered if downside risks materialize and the recovery fails to take off. In particular, if growth does not build momentum and is significantly below forecasts even after substantial additional monetary stimulus and further credit easing measures, planned fiscal adjustment would need to be reconsidered…

• Investment in cities is key to economic recovery 15 Jul 2012

“Fiscal easing measures in such a scenario should focus on temporary tax cuts and greater infrastructure spending.”

“Policies to bolster demand should help close the output gap faster. It needs to be recognized that policy options in this regard come with risks, including uncertainty about their effectiveness. However, these risks need to be weighed against the risk of weak demand that leads to persistently slow growth and high unemployment that become entrenched in decisions made by consumers and investors.”

“Growth is necessary for fiscal credibility – after all, who will believe that commitments to cut spending can survive a lengthy stagnation with prolonged high unemployment and social dissatisfaction?”

“This is a very serious warning to the Chancellor that urgent action to boost jobs and growth is needed.

How much longer must we  wait, and how much more damage must be done, before George Osborne finally does the most important u-turn of all?

“The IMF is clear that the government’s economic plan – Plan A – has failed. They say that weak growth means the government will miss its debt target and that the Chancellor’s existing policies risk causing permanent damage to the British economy.”