All eyes will be on Cardiff tonight as the British Women’s football team take on New Zealand at the Millennium Stadium to kick off the London 2012 Olympics.

So this is it. More than seven years since the declaration that London would be hosting the 2012 Olympic Games, all eyes will be on Cardiff this evening as the British Women’s football team take on New Zealand at the Millennium Stadium. 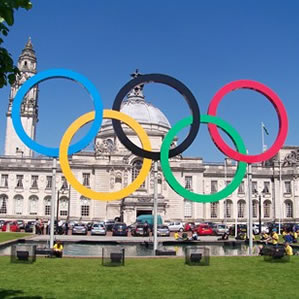 With the weather forecast pointing to a positively balmy evening, all talk of security can be put to one side as the events actually get underway, enabling the media and chattering classes to discuss what the Games are and should be about, namely a festival of sport.

Against this backdrop, right across the political divide, a unity of purposes has been found. Political leaders used to sparring with each other have come together to praise this as a moment for Cardiff and Wales as a whole to shine, to showcase itself to the rest of the world.

“In two days the eyes of the world will focus on the opening ceremony in London, but today Wales is in the spotlight and once again we have an opportunity to show people across the globe what a fantastic host we are for top sporting events.”

For Welsh secretary Cheryl Gillan, meanwhile, whilst outlining her pride that Cardiff will be hosting the first event, today’s focus on Wales has provided an opportunity to highlight the wider role it is playing at the Games including making the medals at the Royal Mint in Llantrisant and the stadium and aquatics centre using materials supplied by Welsh firms.

“These contracts have led to the creation and support of hundreds of jobs throughout the supply chain and they too should be very proud of their Olympic achievements.

“I look forward to watching the exciting events of the next 18 days unfold in anticipation of a record medal haul for Wales and Team GB.”

For Lord Coe, conscious of concerns that everywhere outside London has found it more difficult to engage positively with the games, tonight provides an opportunity to show the benefits they will yield for the entire country.

Speaking ahead of the match tonight at which he will be in attendance. he concluded:

“This is a Games for the whole of the UK and we are delighted the first sporting event is in Wales. I know the Welsh people will extend a warm welcome to all the visitors and spectators coming over for the matches.

“The football starts in Cardiff a couple of days before the opening ceremony and it runs for the entirety of the Games. So there is a massive opportunity for the people Cardiff to really enjoy and be a part of this.”

“We are used to putting on world-class sporting events and this is a city with sport at its heart. Holding the Games here has certainly been a talking point and I think excitement will grow.”

Meanwhile, in a sign of the business opportunities the Games will provide, the Welsh government this week kicked off a marketing campaign, taking out advertising space across underground and rail stations close to the Olympic Park to promote the seven newly designated Enterprise Zones across Wales.

“We are investing in efforts to ensure that Wales secures maximum possible economic and commercial advantage from the Games. This campaign is a very cost effective way of promoting Wales at strategic locations around the Olympic venues and raising awareness of the Wales business offer.

“It will complement other activities we will be undertaking in partnership with UKTI to promote Wales as a first class business location.”