Boris Johnson, the bankers’ best friend, is breaking his promise not to cut London’s police and fire brigade budgets. 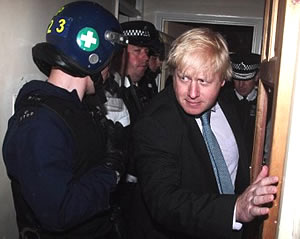 The Tory Mayor, who today wrote he was “a fan of Bob Diamond and his philanthropic work”, faces a £233 million hole in his police budget, and is set to cut London’s fleet of fire engines.

On the police cuts, The Scoop’s Adam Bienkov reports:

The Metropolitan Police service face a massive hole in their budget which they have no developed plans to close, an independent report has found.

Her Majesty’s Inspectorate of Constabulary report “Policing in Austerity One Year On” found that the Met face a £233 million funding gap.

The funding gap will need to be filled by 2015. The force already has plans to make £537 million of cuts to their budget.

The report found that the Met already plans to cut 3280 members of staff of which 1410 will be police officers. Staffing costs make up around 80% of the forces’ budget.

The cuts will need to be made in the face of rising levels of robberies and burglaries in the capital.

Adding of the fire brigade cuts:

Boris Johnson is to break his promise not to cut London’s fleet of fire engines, it was reported today.

The Mayor had denied claims before the election that he was planning to remove 27 fire engines from the brigade.

However, it now appears that he does intend to go ahead with those plans to both remove engines and close fire stations across London.

According to Pippa Crerar at the Evening Standard:

“Fire stations across the capital face closure while hundreds of firefighters could lose their jobs and engines could be taken off the roads… Mayor Boris Johnson has previously ruled out frontline cuts. However, he is now expected to give them the green light.”

The Fire Brigade’s Union today refused to rule out industrial action if the mayor goes ahead with the cuts.

• If hundreds of back office staff are sacked, police officers will be stuck behind desks 24 May 2012

Strangely enough, neither the police nor fire cuts are mentioned by Boris in his Diamond-loving column for today’s Telegraph – a column which, as LabourList’s Mark Ferguson notes, contains about ten times as many words on the “right to drown” as the Libor scandal. Priorities, priorities…