Syria: Another day, another massacre at the hands of Assad's militia, this time the execution of 11 factory workers in al-Buweida al-Sharqiya, near Qusair.

Syria: Another day, another massacre at the hands of Assad’s militia, this time the execution of 12 factory workers in al-Buweida al-Sharqiya, near Qusair in Homs province. 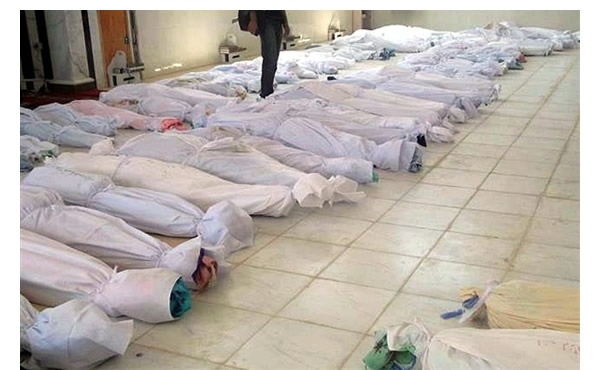 “It happened at a place called al-Buweida al-Sharqiya, which is just near Qusair in Homs province, to the west of the country, not too far from the Lebanese border. Now of course we only have the account and very explicit videos put out by activists of this incident, they say that a bus was intercepted by Shabiha, that is the regime militia which is being widely blamed for the massacre at Houla.

“They went on to the bus, stole everything they could and then ordered these workers off the bus – they were from a nearby fertiliser factory – and gunned them down having first made them chant slogans in praise of the regime.

“So if all that is true, it would be another of these mass killings, probably along sectarian lines but one can’t assume that necessarily, but certainly, as I say, we’re reporting it fairly strongly because twice in the past week, less than a week now, these similar reports from activists, backed up by lurid video, have turned out to be confirmed by UN observers on the ground, so let’s wait and see also if they’ll get to the spot and confirm what happenned there.”

Hamza Al-Buweida, a local opposition activist, has spoken to a survivor of the attack – here’s what he told Reuters:

“They stopped, as usual, at a Syrian army checkpoint. But about 300 meters after the checkpoint a yellow car with four armed shabbiha (pro-Assad militia) stopped their car.

“They took money off the men and then killed them one by one with gunshots to the head. More than 300 bullets were found in the bodies.”

The al-Buweida al-Sharqiya executions are but the latest in the past week, as PA point out:

On Thursday, 13 bound corpses, many apparently shot execution-style, were found in the eastern province of Deir el-Zour near the Iraqi border. The men were believed to be workers for an oil company. It was unclear who killed them.

The uprising against President Bashar Assad’s regime began in March last year. Up to 13,000 people are reported to have died since then. Homs province, where there is significant support for the opposition, has suffered waves of deadly violence. More than 100 people were killed there during a massacre in a cluster of villages known as Houla on Friday and Saturday.

Many of the dead were women and children gunned down inside their homes.

Again we ask: How many more must die, how many more innocent men, women and children must be tortured, raped and massacred before the West acts?