Russian LGBT festival organisers were terrorised and followed home by homophobic gangs with no assistance from nearby police.

Following news of Vladamir Putin’s intentions to clampdown on protests in Russia, reports have surfaced of homophobic mobs terrorizing LGBT festival goers in the country’s third most populous town. 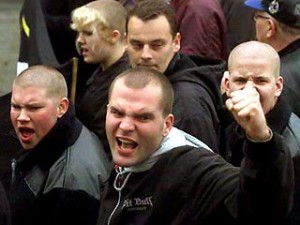 On the second day of the Side by Side LGBT Film Festival in Novosibirsk yesterday, organisers and audience members came under serious threat from a mob of around 30 youths who were shouting insults and voicing intentions of violence.

Russian police were present outside of the building to oversee a picket in support of the homophobic law that has its second reading in the local Novosibirsk parliament today.

Eventually, the police persuaded the youths to leave, for them to return again only moments later. This pattern was repeated throughout the event.

At the end of the screening, security guards escorted visitors to their awaiting cars but the organisers were not so lucky. Organisers were followed away from the event by youths on motorcycles and in cars yet the police made no efforts to stop the pursuit.

• Following his support for Assad, Putin now hopes to silence his own dissenters 6 Jun 2012

A press release from the Side by Side festival said:

“[The police failed] entirely in their duties and the attempt to maintain effective public order and safety the threat of violence and danger to audience members, volunteers and organizers was imminent.

“In a conversation with festival director, Gulya Sultanova, one of the police heads stated: ‘Why have you circulated information about your festival? I don’t plan to be here tomorrow and protect you’.

“Police indifference and their lack of concern to protect peaceful, law abiding citizens from violent thugs has forced the festival organisers to cancel today’s screening out of reasons of safety.”

The Novosibirsk film festival is the second of three to take place this week in Siberia. Last weekend the festival came up against similar problems in the city of Kemerovo. The final festival is to be held in the city of Tomsk, where the festival was banned by the authorities last year. It remains uncertain what the forecast will be for tomorrow’s opening.