Eric Pickles' proposals to deal with 'troubled families' is a rehash of a New Labour policy, but served on bed of dubious spin kicking the poor and public sector workers.

Local government minister Eric Pickles, must have been delighted at the thought of his new policy announcement, which manages to attack two sets of Tory hate-figures at once – the unemployed and social workers.

He told the Mail on Sunday yesterday: 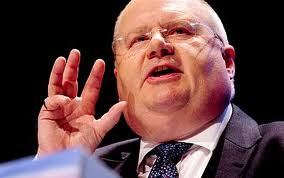 “Sometimes when you meet some families, they have got  the language, they are fluent in social work.’

Mr Pickles said it was time to level blame at 120,000 ‘troubled families’ said to be at the root of high amounts of crime and social disorder.

“Sometimes we have run away from categorising, stigmatising, laying blame,…

“Come artificial boom, come bust; come tough times, come good times, these folks have been completely immune from it. It has been the easiest thing for authorities to say, “Here’s some money, go away.”

As Nushra Mansuri, professional officer of the British Association of Social Workers, the figure of 120,000 is years out of date, and the latest in a series of mixed messages from government.

“Is the government saying that being poor is a crime?

“This figure of 120,000 ‘problem families’ being bandied about is cobbled together from research that was conducted 8 years ago, and was based on families having 5 out of 7 characteristics, including no parent in work, and having a low income.

“The government also needs to decide whether there is a link between deprivation and crime or not. At the time of last summer’s riots, David Cameron said: “These riots were not about poverty. That insults the millions of people who, whatever the hardship, would never dream of making others suffer like this.”

In fact Jonathan Portes, Director of NIESR, over at the Not the Treasury View blog can’t see how the criteria for troubled families means they are necessarily anti-social. He writes:

“Under government criteria, a troubled family is one that meets five out of seven criteria: having a low income, no one in the family who is working, poor housing, parents who have no qualifications, where the mother has a mental health problem, one parent has a long-standing illness or disability, and where the family is unable to afford basics, including food and clothes.

“What instantly leaps out from this list? It is that none of these criteria, in themselves, have anything at all to do with disruption, irresponsibility, or crime. Drug addiction and alcohol abuse are also absent.”

While it may be bad enough accusing those who can’t afford basics as being ‘immune’ from economic turmoil,  Portes suspects the dark arts of spin at hand:

“When we look at the Department’s written guidance on the “Troubled Families Programme”, here, the plot thickens even further. Here’s the very first paragraph:

‘These families are characterised by there being no adult in the family working, children not being in school and family members being involved in crime and anti-social behaviour.’

Having asked the Department for Work and Pensions questions clarifying the coincidence, Portes has received no answer. He concludes:

“It is difficult to conclude anything except that the Department, and the government, have become hung up on the 120,000 number despite the fact that they are well aware that it is now completely discredited.”

Meanwhile, although Pickles presents himself as a break from recent ‘politically correct’ policies, it turns out his proposal is a £450 million fund to incentivise councils to ‘deal’ with these families that uses, according to the Daily Mail:

“methods, adopted nationally by the last Labour government, [that] involve high costs for each family targeted.”

So what we ultimately have is a rehash of a New Labour policy, but served on bed of  dubious spin kicking the poor and public sector workers. How delightful!
Sign-up to our weekly email • Donate to Left Foot Forward