George Osborne has again blamed the double dip recession on the eurozone - the truth, however, is the causes of the recession are primarily domestic.

George Osborne makes a familiar argument today, seeking to blame the double dip recession on the eurozone. The truth is the causes of the recession are primarily domestic. 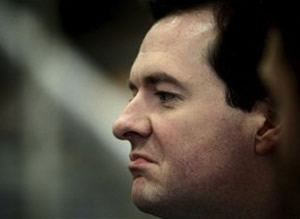 In the Sunday Telegraph, the chancellor writes:

“Our recovery – already facing powerful headwinds from high oil prices and the debt burden left behind by the boom years – is being killed off by the crisis on our doorstep.”

While Britain’s economy contracted by 0.3 per cent in the first quarter of 2012, Germany grew by 0.5 per cent while both France and the Eurozone avoided recession with a flat economy.

Although trade was a very modest net drain on GDP in the first quarter, this was due to a rise in imports rather than a fall in exports.

A much larger contribution to Britain’s double dip recession was a 4.2 per cent quarter-on-quarter drop in gross capital formation, or investment (see Annex B).

• Eurobonds are about solidarity, which is not Cameron’s strong point 8 Jun 2012

Readers should remember that this is not the first time that Osborne has wrongly tried this trick.

“It’s deeply complacent and out of touch for George Osborne to blame Europe for a double-dip recession made in Downing Street. He will fool nobody with these increasingly desperate excuses.”

30 Responses to “Osborne wrong again in passing buck to eurozone”