Manufacturing’s strong rallying out of the 2008 recession, was killed stone dead at the turn of 2011, as effects of the government’s economic policies kicked in.

The latest Markit/CIPS Manufacturing Purchasing Managers’ Index suggests the sector continued to drag on the economy which is mired in its second recession in two years, and may add to expectations the Bank will need to act to ward off the threat of a protracted euro zone-led downturn.

The figures are also likely to add to growing calls for Britain’s Conservative-led coalition government to find new ways to boost growth as it presses ahead with austerity plans. The headline PMI activity plunged to 45.9 in May from a downwardly revised 50.2 in April, its lowest reading since May 2009 and the second-steepest fall in the survey’s 20-year history.

Analysts had expected a more modest dip below the 50-point mark that separates contraction from expansion, to 49.8.

British manufacturing activity shrank at its fastest pace in three years in May as a broad-based global economic slowdown hit demand for British goods, according to a survey on Friday.

As Graph 1 shows, the story of PMI over the last four years is familiar to anyone who has been watching the UK economy over that time: strong rallying out of the 2008 recession, killed stone dead at the turn of 2011, as the effect of the government’s economic policies kicked in. 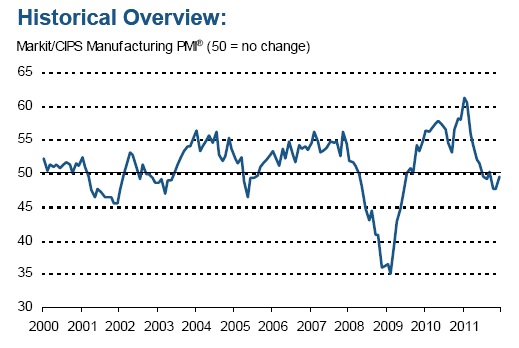 The government has effectively put the march of the makers into reverse.