Chris Goulden is a programme manager for the Joseph Rowntree Foundation

Research published today for the Joseph Rowntree Foundation by the Institute for Fiscal Studies highlights some of the problems and opportunities caused by the decision to localise council tax benefit (CTB) from 2013-14. As well as devolving administration of the benefit, the amounts available will be based on 90% of what would have been spent on CTB in each area.

The department for communities and local government has also said that pensioners – as well as some locally-defined vulnerable groups ­- will be protected from cuts because they are less able to raise their incomes. Governments in Scotland and Wales will be responsible for deciding how to deal with devolution of CTB. In each nation, the cuts are concentrated in more deprived areas (see Chart 1). 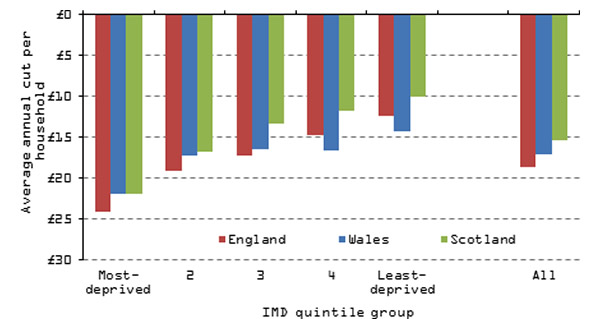 It is a decision that travels in the opposite direction to the major welfare reform of universal credit (UC), which is centralising benefits within a single wrapper under the charge of the department for work and pensions. While there are some sound reasons for localisation, given that it is a rebate of a local tax, it is likely to create headaches for claimants and for local administering agencies, as well as for central governments.

Not only is the 10% cut likely to affect people already in or close to poverty, the protection from this cut provided for pensioners means that working-age adults are hit much harder; on average losing almost a fifth of their current support and, in some areas of the country, up to a third.

At present, two out of three recipients are passported onto CTB based on entitlements to other benefits that are being phased out under UC. This is going to be difficult for councils to cope with in designing their own systems. An added complication is these systems will need to run alongside old benefits and UC for four years as UC is phased in.

• Could the welfare bill signal the death of social housing? 22 Dec 2011

Given all these complications, and the many other issues that councils have to worry about, it surely would have been much better to have incorporated CTB into UC in order to stick with its sensible guiding principles of simplification and making work pay.

Will there be a U-turn? Unlikely.