The scandal surrounding the exploitation of unpaid stewards at the jubilee celebrations is the latest object lesson in the Work Programme's many systemic flaws.

The Guardian’s revelation on Monday that a large group of long-term unemployed jobseekers had been pressed into service as unpaid stewards at the weekend’s jubilee celebrations, as part of the government’s flagship Work Programme, has prompted widespread outrage. 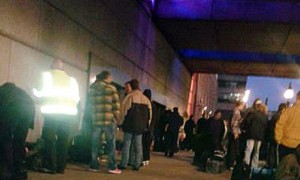 Up to 80 people were taken to London by coach from locations across the southwest to work on the river pageant. Around 30 of them were claiming Jobseekers’ Allowance, while the other 50 were on apprentice wages.

Two of them, speaking to the Guardian on condition of anonymity, described being forced to camp under London Bridge in the early hours of the morning, working a 14-hour shift without access to toilets, and thereafter travelling by tube to a campsite in Essex, where many had to erect their own tents.

One described it as “the worst experience I’ve ever had”.

Significantly, both said that they had initially believed the work would be paid. It was only when they reached the coaches to travel to London that they learned it was not, and that they would not be considered for paid work at the Olympics if they declined the opportunity to work at the jubilee celebrations.

The episode is just the latest to see the Work Programme making headlines for the wrong reasons. This afternoon, David Cameron’s spokesperson said:

“We understand that the company involved has apologised. But more broadly the work programme is about giving people who have often been out of the workplace for quite some time the chance to develop skills that they need to get a job that is sustainable…

“The work programme itself offers experience and the chance to develop those skills that people really need to get into sustainable jobs.”

Downing Street assures us that the ‘London Bridge incident’ is a one-off. However, there’s a strong case for saying that the most obvious things that went wrong with the jubilee stewarding are representative of systemic failures throughout the Work Programme as a whole.

There are serious questions to be asked about the value of those experiences and skills, the buck-passing from the DWP that the scheme represents, the lack of oversight on middlemen and employers it allows for, and its central economic premise.

Here, then, are Left Foot Forward’s five reasons why the Work Programme gets it wrong:

1) The Black Box approach: a lack of accountability

Central to the Work Programme is the so-called ‘Black Box approach’. This means, in practice, an intentional lack of oversight, with first and second-tier contractors and subcontractors – in the case of London Bridge, it was Tomorrow’s People – measured purely by results.

Ostensibly, the idea is to free Work Programme providers from scrutiny and thus allow them to pioneer innovative approaches to lacking long-term unemployment. “Naturally”, writes Rafael Behr, “the DWP does not (knowingly) tolerate cruel, illegal or fraudulent methods in the black box.”

Yet the point is, of course, that without inspecting contractors’ processes the DWP cannot guarantee against those things – hence London Bridge, with 80 unpaid jobseekers treated extremely poorly and £1.5m worth of government budgeting for jubilee stewarding gone missing. The suspicions of fraud that will inevitably surround the latter issue are not new, as Left Foot Forward made clear last month.

In general, the lines of referral, from the DWP to first and second-tier providers and then to employers, make it very hard to determine who is responsible for any given client at any given time, as does the tendency for large contractors to subcontract work amongst themselves.

2) Exploitative employers: a lack of control

Tomorrow’s People, the subcontractor involved in the London Bridge incident, issued a statement this morning distancing themselves from the scandal.

“What happened to our clients on their arrival in London was totally unacceptable and is contrary to the Tomorrow’s People way of operating”, they claimed. “We are very concerned at [the employer] Close Protection UK’s lack of care for our clients and lack of attention to their safety and wellbeing. We are urgently reviewing our involvement with Close Protection UK (CPUK).”

Even if one assumes the best about Tomorrow’s People, it is clear that, just as the DWP cannot effectively guard against fraud within the Work Programme, so subcontractors have no power to protect their clients from exploitative employers. Indeed, given the pay-by-results method involved here, the commercial incentive is precisely to place their clients with the first employers they can, regardless of the latter’s credentials.

Downing Street’s statement, quoted above, yet again repeats the mantra that unpaid introductions to the world of work represent a necessary first step to gainful employment. Yet on this issue, the government wants to have its cake and eat it, conceptualising unpaid positions as merely that first step while releasing ostensibly optimistic employment figures that rely for their optimism on a rise in unpaid work.

As Left Foot Forward pointed out in April, “the ‘recovery’ in the jobs market is being driven by part-time work and precarious employment rather than full-time, permanent positions.” The Work Programme acts as an incentive for employers to offer yet more unpaid positions: indeed, last year, the government offered companies taxpayer subsidy to do so. That is anathema to any genuine economic recovery.

Cait Reilly, the art history graduate notoriously sent to work in Poundland on the Workfare scheme, was certainly not bone idle when she was referred. As she wrote in the Guardian earlier this year: “I was already in the middle of a work experience placement that I had organised for myself (and which was more relevant to the museum career I hope to pursue), and I already had retail experience.”

She was, in fact, volunteering in a museum, something she had to abandon upon being sent to Poundland. In relying upon lazy binaries – work is good per se, unemployment is bad – while offering an incredibly narrow range of jobs that cater to a very basic skill set, the Work Programme frustrates innumerable young people in precisely the same situation.

The aforementioned mantra – unpaid work is beneficial as a first step into employment – only makes sense if there are, in fact, further steps to take. The Work Programme seeks to deal with an unfulfilled backlog of training needs when the problem is, in fact, that there simply aren’t enough jobs.

As Behr puts it:

“What is becoming increasingly clear is that the Work Programme was conceived at a time when the main problem with unemployment was thought to be difficulty in matching people to jobs, training them and motivating them to take what was on offer. Those are still issues in some areas and some cases, but much deeper structural problems with the labour market are now apparent.

“So too are regional variations that mean there simply aren’t vacancies to be filled.

“But the feature of the labour market that seems to be causing most problems for the image of the government policy is the decline in decently-paid low- and semi-skilled jobs alongside a vast expansion of unpaid work in the guise of “experience” and “internships”. This too was the defining feature of the Jubilee steward story.

“For the employer (and presumably the Work Programme provider) it seemed quite reasonable to offer unpaid work as a precursor to paid work. This is well-established in the jargon as one of the “pathways” back to labour market participation. But that concept relies on the assumption that people need coaxing off a cosy life on benefits. Many are far more preoccupied by the urgent need for wages.”

34 Responses to “After Jubileegate: Five reasons why the Work Programme gets it wrong”