Ed Jacobs looks at the press reaction to Thursday’s local elections in Scotland and Wales.

As Scottish Labour leader Johann Lamont declared local election results across Scotland showed the “tide is going out” on SNP leader Alex Salmond, while the first minister himself argued the results represented a “great win” for the SNP. 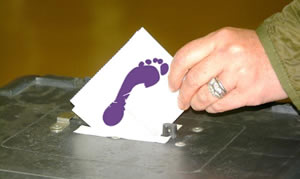 With the spin machines north of the border in overdrive, newspapers across Scotland have sought to address a simple question – who came out of the elections best and what does it mean for the referendum on independence?

In the Scotsman, its leader column argued David Cameron will now be hoping for:

“…an outbreak of competence among his administration and giving thanks he has until 2015 for it to manifest itself.”

For the Liberal Democrats and Nick Clegg, meanwhile, the paper declares:

“…things got even worse – if that were possible.”

It points to the loss of their “local government base in the English north” and suggest they are now effectively a southern party.

And addressing the real battle between Labour and the SNP it says:

“It would probably be more correct to call the outcome of the Scottish local elections a draw.

“Labour may have blunted the SNP’s momentum in Glasgow, but the electorate are reminding Mr Salmond he is in office to improve their wellbeing, not just campaign for independence. Equally, Labour has a lacklustre record in Glasgow. It should use its reprieve by the voters to show what it can do.

“Finally, it is worth repeating that the pathetically low turnout in the 2012 local elections is a danger to democracy. Politicians should stop blaming voter apathy and start making our council chambers places to be proud of.”

Over at the Herald, meanwhile, whilst declaring “Labour and SNP share the spoils”, looking at what it could mean for elections to the Scottish Parliament and the independence referendum, the paper notes:

“There is all to play for in the next Holyrood elections, and in the referendum, though Labour could justifiably feel a little more confident today about both, while the SNP will be taking stock of the need to redouble its efforts to achieve its goal of independence.”

Moving to the wider significance of the day’s results right across the UK, looking at “the more immediate question” of “where the results leave the Tory/Lib Dem coalition”, the paper’s leader concludes:

“It was already clear by Friday lunchtime that many in each party were turning on the other, with the main charge coming from Conservative ranks, blaming the Lib Dems for championing ‘barmy’ policies such as Lords reform and gay marriage.

“The real root of the coalition’s woes, however, is much more straightforward: it’s the economy, stupid. In truth, implementing an austerity package on the scale that any of the three main parties were advocating in the run-up to the 2010 elections would have resulted in a bloody nose two years down the line, whoever was in power.

“If the Westminster government has been on trial in this election, it is over the depth and speed of the austerity cuts. The decrying of Lords reform, green taxes and gay marriage by disgruntled Tories, misses the point and the pressure by some activists for a lurch to the right, would certainly be disastrous for the party, as its history since 1997 shows.

“Time for a reality check, anyone?”

Over at the Labour-supporting Daily Record, meanwhile, whilst recognising the nationalists remain the biggest party of local government, results north of the border point to the SNP “tsunami” being calmed back.

Pointing to the Labour gains and inability of the nats to make the kinds of breakthroughs they had hoped for, it says:

“It has to be healthy for Scotland that key councils will be standing up to the SNP government over the next few years rather becoming cogs in their independence campaign machine.

“Labour may not have won yesterday but they did fire an important warning across Salmond’s bows.”

Over in Wales, Laura McAllister, professor of governance at the University of Liverpool and an expert in Welsh politics, noted Labour’s comprehensive victory was symbolic of “the patchwork nature of political support in Wales”.

In The Guardian, in an article in which she pointed to the Conservative Party having faced a “disappointing but not totally unexpected” set of results, McAlliser writes:

“In this election we’ve really seen the multi-levelled nature of devolved politics play out fully. It’s the first time the Westminster government has been of a different complexion to the Welsh Assembly.

“And the clear headline in Wales is a resounding success for Labour – just as it has been across England too.

“Labour conducted a clever campaign – making sure this was a Westminster-orientated vote. The party motivated voters by saying: this is an opportunity to give the coalition a bloody nose. It deliberately contested the election on that basis and it clearly worked.

“Except in a very few instances, there wasn’t a sense of this being about local issues. These elections were fought entirely as a verdict on the coalition, which of course Wales didn’t vote for in 2010.

“There have been some interesting variations that point to different patterns of voting in the national assembly when the context is one of a focus on UK government.

“In many respects these local elections exemplify the ‘second order’ theory of multi-tiered elections – that voters use elections such as these as an opportunity to punish the incumbent government.

“Labour did well in the metropolitan areas of the south, Cardiff, Swansea and Newport. It also regained the valley seats it had lost in 2008. But then it has to be borne in mind that the 2008 election was pretty catastrophic for Labour.

“It came in the dying days of the Brown government and after the abolition of the 10p income tax tier. So in a sense Labour was starting from a low base in a country where it has historically dominated. Even so, the swing in an authority like Cardiff is quite remarkable. Labour pretty much cleaned up in the city, and Cardiff is a diverse, relatively wealthy city these days.

“Plaid Cymru has not performed as well as it would have liked, but I don’t see a bout of soul-searching in the wake of these results. The party is in a period of self-renewal. It has just elected a new leader, Leanne Wood, who has only been in post for six weeks.

“She is a different kind of leader for Plaid, which has made the decision to reposition itself as a party for the whole of Wales. She’s female, a first-language English speaker and from the south. But again, these elections come far too soon after her to see whether this new direction will bring dividends.”

Former first minister Rhodri Morgan, meanwhile, says the Lib Dems have a simple test – can they bounce back from such a drubbing, and if so, how?

“I’ve been campaigning in council elections for half a century. There is an iron law in voters’ behaviour in choosing their local councillors – whichever party is in power in Westminster will suffer huge losses of seats in the local elections.

“I am not sure if that swing of the pendulum is caused by governments suffering from ‘mid-term blues’ caused by doing unpopular things in the middle of the five-year Parliament or by the inherent British sense of fair play. ‘Tories are running the government – we’ll have Labour to run our town hall (and vice versa in 2004 and 2008 etc) – it’s only fair!’

“Devolution hasn’t altered that law very much in Wales but the move toward four parties and independents swinging on the pendulum instead of two, certainly has affected the pattern. To win Cardiff and Swansea back, Labour had to overcome Lib Dems, rather than Conservatives. It was Plaid that had to be beaten in Caerphilly and independents in Blaenau Gwent and Merthyr.

“To gain council seats, you don’t actually have to convert voters from the other side to your persuasion. What usually happens is that the regular voters for the other side stay at home, and your voters who stayed at home last time around, are angry enough this time with the misdoings of the government in power to come out and vote this time. That’s the law of differential abstention.

“Conservatives might be wondering why there is such a backlash against the UK government and none against the Labour administration in the Assembly. Indeed you could say there’s a ‘frontlash’ towards Carwyn Jones and his devolved government, not a backlash.

“The Lib Dems might feel even more aggrieved about the anti-government swing, as they are only junior partners in Westminster.

“I bumped into Lembit Opik on the bus in London a month ago. He said the Lib Dems were in ‘crash and burn’ mode. They haven’t been demolished but councils are their ‘activist base’. That’s true for all parties but especially the Lib Dems. They haven’t been in power in Westminster in modern times, so it’s a new experience for them to be suffering anti-government backlash.

“The test is how you bounce back from defeat, before the next election.”

19 Responses to “Vote 2012: A Lab-SNP draw in Scotland, and a “frontlash” towards Labour in Wales”