Will Straw takes apart the plans of the 2020 Tax Commission, published today, which proposes cutting taxes to 33 per cent of national income.

Proposals by the Institute of Directors and right wing pressure group, the TaxPayers’ Alliance, would cut more than £120 billion from public spending after the next election. The 2020 Tax Commission, which is published today, proposes cutting taxes to 33 per cent of national income.

The proposals do not, however, outline where the related cuts to public spending would come from. According to the Office for Budget Responsibility (Table D.6, pdf), total public spending will be 42.2 per cent of GDP in 2014-15. Bringing this down to 33 per cent – even allowing for 1.5 per cent of Gross Operating Surpluses in the national accounts* – would require a further 7.7 per cent of cuts, equivalent to £121 billion in today’s prices.

Chart 1 below from the 2012 budget (pdf) details how these spending cuts could be made. The £121 billion would be roughly the same as the entire health budget (£130 billion); the combined education (£91bn) and defence (£39bn) budgets; or equivalent to cutting 60 per cent of the entire social protection budget which includes all pensions (£207bn). 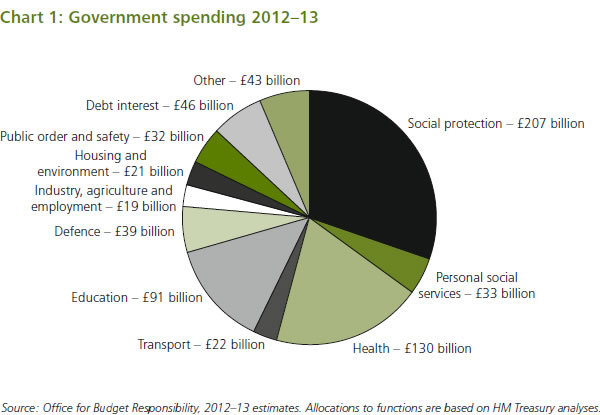 The report includes proposals to introduce a flat rate 30p ‘direct’ income tax to replace income tax and National Insurance. This would slash taxes paid by those in the higher 40p and top 50p rates while doing little for those paying the basic rate of 20p. They also propose replacing corporation tax and inheritance tax with a tax on ‘distributed income’. Richard Murphy explains how this would allow a huge tax loop hole for those who retain their income in shares.

The net result of the changes would amount to a significant transfer of income from poor to rich. Those advocating the report include Fraser Nelson, editor of the Spectator, David Frost, former Director General of the British Chamber of Commerce, and Allister Heath, editor of City AM.

* Gross Operating Surpluses include all non-tax government income. OBR estimate this to be 1.5 per cent of GDP (Table 4.6, pdf).