The savagery of the regime of Syrian President Bashar al-Assad continues to worsen with each passing day, reports Shamik Das.

The savagery of the regime of President Assad continues to worsen with each passing day. 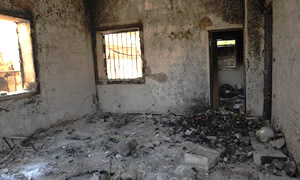 Following the massacre of the innocents last week, the brutal, unimaginable slaughter of 32 children in villages in the central Syrian area of Houla, it emerged today that security forces are using rape to terrorise the opposition.

Security forces in Syria are using rape against both men and women as a tool to spread fear among the opposition, victims and human rights groups have told the Daily Telegraph.

In the jails and interrogation centres of secret police, prisoners have been brutalised, either at the hands of officers, or more often with a bottle or other utensil.

“In detention facilities rape is clearly used as a form of torture to humiliate and degrade people, and to bring back the wall of fear,” said Nadim Khoury, Deputy Director for the Middle East at Human Rights Watch

“There was a 17 year old boy. He was in a terrible condition. He would sit and cry and refused to eat or speak to anyone. Eventually with the help of a councillor he opened up. He had been arrested at a protest. When he was taken to a detention centre two officers had raped him.

“I know of many cases like him. They would throw raped male protesters back out on the streets as a warning to others.”

Rami’s wife, Hadija, was left behind at home with their five children after he was forced to flee his home town of Dera’a by Assad’s brutal regime, the report adds:

Late one night, ten ‘shabiha’ [government paramilitaries] broke into the bedroom where she and her daughters were asleep. “They tore at my nightgown trying to strip me. I started screaming. My daughter was crying,” said Hadija. “They were taking videos and photos on their phones.” The men only fled when neighbours who heard the commotion intervened.

A week later four of them returned. “I promised that my husband would hand himself him,” said Hadija. “They said: ‘Tell your husband that we have seen your breasts and we have stripped you. Next time we are going to rape you and we film it and air it everywhere.'”

Terrified, she gathered her children and fled to stay with relatives on the outskirts of the city, never staying in one home for more than a few days. “They [security forces] did the same with many others. It became known that the sister, wife, or daughter of anyone who was fighting might be raped, and many were,” said Hadija. “Now those who are wanted take their wives and daughters with them.”

The report also tells the story of Fathima:

“In Homs they treat the women as spoils of war,” said Fathima, who fled from Baba Amr. Fathima’s husband had been leading a rebel unit in Baba Amr when the district fell and soldiers began conducting house-to-house raids. Hurriedly she hid her husband, children and thirteen year old brother in law in a secret cranny in their home before opening the door.

“One of the men wanted to see inside the pantry. Then he grabbed me hard by the hand and tried to drag me inside. I resisted, I was praying ‘in God I put my faith’ out loud. I freed my hand but he grabbed me by the waist. He tried to rip my clothes away,” said Fathima. “I didn’t want to scream because I knew my husband would come and then they would kill him.”

On this occasion Fathima said she was saved when another soldier who shouted at the men to leave the house. Others were not so lucky, she said: “It is common in Homs. Relatives on my husband’s side were found killed, among them Hameda, a 17-year-old girl, who had been raped.”

The sickening accounts carry echoes of the doomed regime of Colonel Gaddafi, whose forces used rape as a weapon of war.

As Ed Jacobs wrote on Left Foot Forward yesterday, we cannot forever sit back and allow Assad to continue; how many more must die, be tortured, be raped and be brutalised before the West finally says “enough is enough” and intervenes?

19 Responses to “Syria: Assad’s forces “using rape as a weapon””