This week in Northern Ireland is Community Relations Week - with a warning issued that the province continues to have a serious problem with sectarianism.

This week in Northern Ireland is Community Relations Week – with a warning issued that the province continues to have a serious problem with sectarianism. 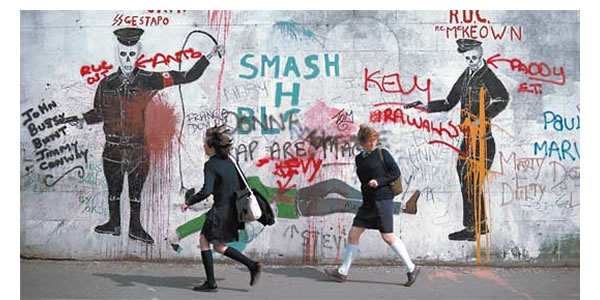 Speaking at the start of the week, Tony McCusker, chairman of the Community Relations Council, argued:

“There are still many difficult issues to be addressed, including segregated educational provision, interface areas and barriers, residential segregation, misuse of flags and emblems, parades and other expressions of cultural identity.

“The number of interfaces in Northern Ireland was 22 when the Belfast Agreement was signed; today the number is as high as 88 by some estimates.

“We still see flags and emblems as prominently displayed during the marching season as before the Agreement. Deep divisions in housing and education also remain. To add to this, racism in our society is now apparent.”

Seeking to strike a more optimistic note, however, McCusker concluded:

“The challenges are clear, but we have seen noteworthy progress in community relations since the first Community Relations Week in 2003. The new peace bridge across the Foyle offers considerable hope regarding what can be achieved.

“So too does the progress that has been made in Alexandra Park, North Belfast, for example in relation to opening a gate in the interface. These and the many events during Community Relations Week offer a picture of a possible future which is both shared and inclusive.

“It is one worth striving for together.”

“History will not forgive us if we squander the opportunity presented by an end to violence to tackle the underlying divisions of this society.

“This must become a truly shared society where nowhere is out of bounds to anyone because of their creed, colour, gender or sexuality.

“Above all we must move past preening ourselves for moving on from the disaster of the 1970s and face the challenge to act to make change.”

He courted controversy, however, in using his speech to accuse the DUP and Sinn Féin of aiming for the “lowest common denominator” in their approach to the programme for Cohesion, Sharing and Integration (CSI).

“Now that the CSI process is out in the open, it’s time that Alliance set out, in public, the minimum standards against which we will judge a new Shared Future strategy, and we will be doing so in the coming days.

“In the deputy first minister’s interview on Saturday he suggested that if agreement can’t be reached among the five parties, he and the first Mmnister would move forward with something that they “think would find maximum acceptability within the community”. My fear is that kind of language suggests a strategy that is the lowest common denominator between the DUP and Sinn Féin.

“But we won’t bring about “an end to them and us” by settling for the lowest common denominator – we’ll only achieve it by setting the bar high, and working in every department to reach it.”

His remarks drew criticism from first minister Peter Robinson, who accused Ford of playing politics over the issue.

Robinson argued that, in the words of the Belfast Telegraph:

“The focus should be fixed on negotiating policies that can secure maximum support.”

As Left Foot Forward’s Kevin Meagher wrote on these pages just this week, in relation to the disturbing news of a rise in punishment beatings in Derry, Northern Ireland’s peace process is still very much a work in progress.