Ministers are using low gilt yields as a sign of coalition "credibility", yet low yields are a sign of undermined growth, explains Cormac Hollingsworth.

Ministers are using low gilt yields as a sign of coalition “credibility”, yet low yields are a sign of undermined growth.

Their evidence for this credibility is the low gilt yields. And on cue, the gilt yields went to a new all-time low last Friday. But the problem is that the more the coalition undermines growth, the lower gilts go. If growth was expected to rise, gilt yields would also rise. Unfortunately the same time, lower growth means higher borrowing.

So it’s quite possible that lower gilt yields are more a sign of panic about the economy than sign of credibility about the deficit. And it turns out that every time the City raises its expectations about the total borrowing of the coalition over the course of this parliament, gilt yield falls.

Hard to believe? Take a look at our graph below: 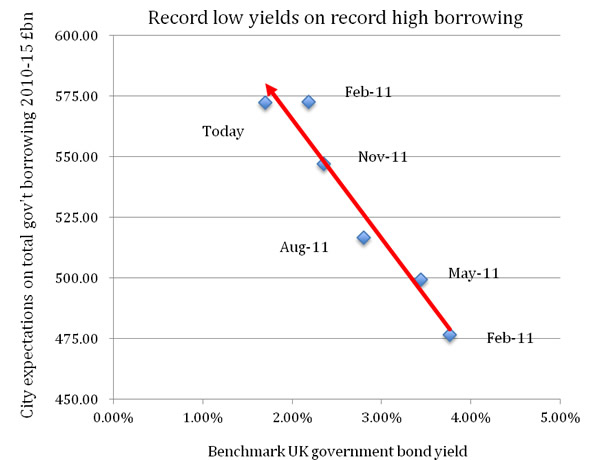 It’s time for the media to stop swallowing the credibility line and start holding this government to account.