David Cameron may have to spend the next three years courting voters to his right, increasingly distant from mainstream Britain.

A YouGov survey for the Fabian Society has further confirmed that Labour’s poll advances are comparitively secure, coming mainly from disgruntled left-leaning 2010 Liberal Democrat voters who are unlikely to switch to either of the coalition parties: 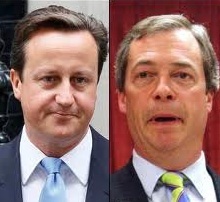 “Only 17 per cent of the group would even consider voting Conservative and 43 per cent Liberal Democrat (each defined as a 4 out of 10 chance or higher). This suggests that around half Labour’s new supporters are pretty much undetachable, even if the coalition parties stage a good recovery.

“This ‘worst case’ level of support would still translate to Labour securing around 35 per cent in the next election, which guarantees another hung parliament.

“For the Tories to lead Labour pretty much all ‘Ed’s converts’ who would still consider voting Conservative or Liberal Democrat would need to switch their allegiance back. That’s not impossible, but it should be preventable.”

That means that if David Cameron tacks to the centre, he may be able to detach around 2 per cent of the overall vote from Ed Miliband’s Labour party.

However, given that UKIP are now polling regularly above 5 per cent in many surveys, it seems like David Cameron will be forced to tack right rather than left, further alienating the centre ground.

The YouGov/Fabian survey confirms the situation outlined by Left Foot Forward last May:

“The Westminster conventional wisdom – that Ed Miliband’s Labour Party is not doing well enough – appears to be based on two contradictory notions. The first is that Labour needs to build a larger opinion poll lead than its current typical 4-5 per cent,  as it will gradually erode before the next election.

“The other is that the Tory vote is holding up – as evidenced by last week’s election results. But if, in effect, the Tories have not lost any votes to Labour, it’s hard to see what erosion can take place.

“Both opinion polling and the local election results provisionally point to the same picture: Labour has picked up votes from the Liberal Democrats, but not from the Conservatives.

“If Cameron is to claw back those four to five points, it’s not going to come from Labour – who are either voters that stood with the party through the nadir of 2010, or are former Lib Dem voters, presumably unhappy with the decision of Nick Clegg to go into the coalition.”

The coalition was thought to have enabled David Cameron to anchor the Tories in the centre ground, but it appears the opposite is true: He may have to spend the next three years courting voters to his right, increasingly distant from mainstream Britain.

15 Responses to “If psephology is destiny, Cameron will be forced further to the right”