George Osborne was forced into another humiliating U-turn today - this time on the charity tax, the fifth government reverse this week.

George Osborne was forced into another humiliating U-turn today – this time on the charity tax, the fifth government reverse this week and one they tried to bury under the weight of dead man walking Jeremy Hunt’s impending implosion at the Leveson Inquiry and Andy Coulson’s perjury charge. 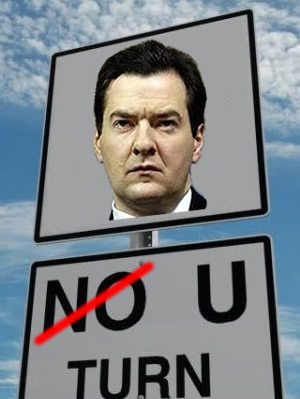 He has announced there will continue to be no limit on what an individual can donate to charity and offset against their tax liability. A spokesman said the Treasury had listened to the views of charities.

It is the latest in a series of U-turns on policies announced in the Budget, including the pasty and caravan taxes.

Mr Osborne announced in his March Budget that from April 2013 the maximum amount that would be able to be reclaimed in tax relief – including on charitable giving – was £50,000 or 25% of the individual’s income, whichever was the greater.

The chancellor said in a newspaper interview he had been “shocked” by the scale of legal tax avoidance by the very rich, after seeing the result of a confidential study by HM Revenue and Customs and this was a “specific” loophole he wanted to close.

But the plan was met with dismay by charities who claimed it would cause major donations to stop.

This is the government’s fifth U-turn this week – it as already ditched or watered down plans for VAT on cornish pasties and static caravans, secret trials involving sensitive evidence and a study into the humane killing of buzzards.

The government made the U-turn on Thursday lunchtime, while Jeremy Hunt was undergoing a thorough grilling at the Leveson inquiry and the spotlight was also on former Number 10 spin doctor Andy Coulson, who has been charged with perjury.

It was not immediately clear which embarrassing event that ministers were trying to bury, or if the government had just decided to get all the bad news out on the same day.

The policy had been widely criticised, and with good reason; as Tony Blair explained last month:

“This is absolutely the right moment for government to do all it can to promote philanthropy; and certainly nothing to harm it.

“When acute crisis threatens, government can act with speed. But otherwise it ponders endlessly and then proceeds at a glacial pace. It is into this space – not as a substitute but as a complement to conventional government and politics – that the philanthropic sector has marched.”

As Left Foot Forward reported on Tuesday, the pasty tax U-turn looks set to leave the government a £35 million black hole. The charity tax reverse, in terms of the cost to the coalition’s credibility as well as the cost to the Treasury, may end up being much, much higher.