With discussion of the voluntary sector’s role in welfare provision rife, one writer examines the work of the Salvation Army, and the difficulties it faces.

Tola A. Ositelu is a freelance arts and culture journalist based in London

You could be forgiven for walking past the Salvation Army centre on Albion Way, Lewisham without ever really noticing it. I have done so countless times, even though I have lived in the area almost all my life so far. 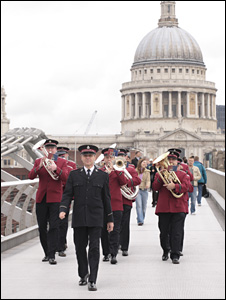 Since it was founded by William Booth in 1865, the Sally Army has been a part of the cultural landscape of many cities across the world. If you’re not in direct need of its services, or rummaging through the wares of its numerous thrift shops, its red and white motif can quite easily blend into the background.

Yet last August, this particular SA centre gained international notoriety when the scenes of carnage unfolding outside its doors were broadcast across the globe. It was, of course, the now familiar image of the summer riots that swept across the UK, descending upon this little corner of south-east London.

“I had a colleague who rang up at seven o’clock that night and said ‘you better turn on Sky News, because your hall is all over it’. And of course there was a line of riot police just outside…”

We’re discussing the corps’ community work, ensconced in a cosy office adjacent to the charity shop that funds the many projects Nigel and his team run from the centre. Byrne has been a member of the organisation for three decades. He moved to Lewisham 18 months ago after spending several years in South Wales and Great Yarmouth.

There, he says, abject poverty and substance abuse see the Salvation Army even more in demand than in London.

Nigel is clearly very proud of the organisation’s history of reaching out to the disenfranchised. Booth and his supporters found abundant opportunity to put Christian charity into practice when the Army was established in 19th century east London. Prostitution and illegal drinking dens were rife. Booth is even credited with helping to campaign for an age of consent in the UK as a way of combatting child prostitution.

• Out in the cold on Christmas day: The growing homelessness crisis 22 Dec 2011

• Are Pickles and Shapps misleading the public on homelessness? 9 Jul 2011

As well as being a church, the Salvation Army has “a great, fine reputation for social work”, says Nigel:

“It flows from what we do as Christians; that is absolutely key. We’re in the middle of a borough that reflects some of the poorest parts of London, and some of the most difficult situations.”

Nigel regularly liaises with various agencies, from the Job Centre to homelessness charities such as Thames Reach:

“We don’t mind who you are. Age, race, gender, orientation, religion…if you appeal to the Salvation Army for help we’ll try and meet your need. We do that in ways that we’re able. Given that this is not a social service centre, if you want clothing we will clothe you, if you want food we will feed you.”

According to Nigel, the Salvation Army has always been ahead of its time:

“When people talk about this concept of food banks as a new thing, we’ve been doing that for many, many years. Other churches and particularly schools in the area give us packet and tinned goods at harvest time, and we collect all that in.”

With the proliferation of pound shops and supermarkets competing with each other over who can be the most budget friendly, cheap food is not in short supply. So, who are the recipients of this food aid?

Nigel is characteristically measured in his response:

“It depends really. What I find is that when people are referred from the Job Centre, often there’s a gap that’s occurred between the finish of one benefit and the start of another and they fall down that gap. There are people who just aren’t eligible, or don’t fit into the right criteria, who are then left without any means of support at all. That’s the point where we step in.”

The food parcels are only ever meant to be a short term solution until recipients can get back on their feet. Limited resources don’t allow for anything more.

“We can give up to three, but before we give them a fourth we would want to talk to them about their current circumstances. We’d try to advise them about what’s gone wrong. A basic food parcel should last three or four days for one individual. That should then be enough time for the new benefit to have kicked in.”

It is, perhaps, this very visible presence in the local community that spared the Albion Way centre being damaged during last summer’s civil unrest:

“When I came down the next morning the whole of the road was strewn with missiles, litter bins, burning cars, wreckage and what not. [But] this place was not touched. In fact even the missiles only came as far as the beginning of this porch. No windows broken. The textile bank, which is just outside, was full of clothes but it wasn’t set alight.”

He puts this down to the respect that people generally have for the Salvation Army:

“I think where we are situated and the type of work we do, people recognise that we’re not a target; we are on their side. There must have been something in the thinking… Although people seemed to behave that night as if there weren’t any boundaries anymore.

‘The day [after the riots] people popped into say ‘Are you all right? Any damage?’ I was then able to say to them ‘are you all right, any damage to where you are living?’ There are particularly vulnerable people in this immediate area; folk across the road [live in] a housing project that deals with the mentally ill.

“It must be dreadful living in a community where people are rioting directly outside your front door, when you’ve already got mental health challenges. You can only imagine how that would disturb. Part of our role here is to have a ministry to the people in this locality, and I’m pleased to say we do that quite well.’

Perhaps surprisingly, the riots and the mounting gloom of the current global financial crisis, Nigel insists, have not had any noticeable effect on the demand for the Salvation Army’s services since he came to Albion Way:

“The same problems have existed the whole time I’ve been here. I don’t think it’s got any more acute particularly in the last few months for instance, what with the riots. It was an unsettling time, but it didn’t affect the bread and butter of my work. There were still homeless people coming, there were still people coming for food parcels.”

There are four Salvation Army centres in the whole borough of Lewisham; as far as Nigel is aware, none receive any local or central government funding:

“I’m not sure, if you asked the council, they would even know what we did.”

The Albion Way centre is able to fund its social outreach schemes thanks to its second hand shop next door. When Nigel inherited his post, the hall was running at a £12,000 per annum loss, relying heavily on subsidies from the Army’s central fund.

Setting up the charity shop in the previously unused lounge area was his idea:

2To be honest, we were in such a sorry state financially that we thought it was on the cards that this place would close completely. People used to regularly leave clothes and things on the doorstep. The old grey cells got going and I thought ‘there’s got to be something we can do here in order to resource ourselves’.”

It was a simple, but highly effective, brainwave.

“I am pleased to say that we’re financially viable again. We don’t take any central money at all. All that we raise goes into the work we do here. A lot of people say to me they just can’t afford the prices in the shops. So [the charity shop] fulfils those needs, but it also resources us.”

The bulk of the Lewisham Salvation Army’s outreach work is with the homeless. Each matter is assessed on a case by case basis. Nigel is eager to tell me the story of one young man they recently assisted.

He had come up from Margate, and was not eligible to be re-housed by the local authority:

“He slept at the back of the registrar office for a week. By chance he then got wind of a job doing what he specialised in; fitting roller shutters.”

Without any formal clothes for an interview, the young man despaired of his chances. The Lewisham corps bought him a Primark suit and paid for him to attend the interview in West London. He got the job.

“That worked out beautifully. He’s living in a flat, he’s got a job. He’s gone from street homeless in Lewisham to working in Ealing and I’m pleased to say we were able to be part of the process.”

Nonetheless, Byrne is aware of the Salvation Army’s limitations when it comes to assisting those sleeping rough.

“If someone has just come into the area and hasn’t been made homeless within the borough, the council won’t have anything to do with re-housing them. If you add to that being over 21, male and single, you then are – if you want to view it in terms of the points system – very low priority. It’s made things a lot more complicated because in the old days you’d just pick up the phone and say: do you have a place?

You would get them up there one way or another, and you’d know that they’ll be okay. It does frustrate me slightly that I can’t do that.”

24 Responses to “The Salvation Army, stepping in to help those who have the least”