Each night, staff and volunteers work in shifts looking for rough sleepers. Rather than focus merely on the immediate needs of a bed for the night, London Street Rescue aims to get to the core of the person’s needs and get them off the streets for good. 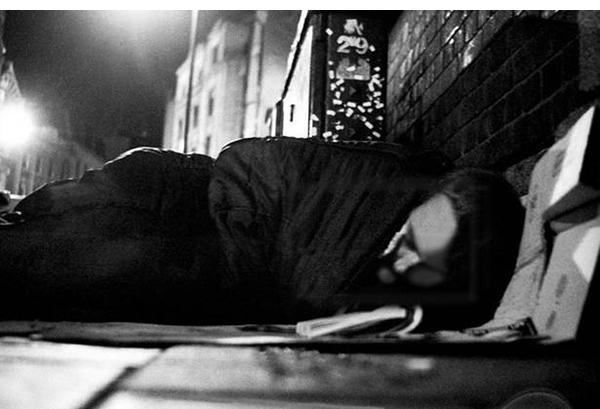 The issue of homelessness is notoriously contentious, eliciting ample compassion in some and recrimination in others. Nicholas and the team understandably prefer to take a non-judgmental approach to their work.

“I wouldn’t want to stigmatise the homeless.”

However, in his nearly ten years with the organisation, Nicholas has noticed certain recurring causes of privation. Mental health problems and substance abuse are two of the most prominent. The average death of intravenous drug users living on the streets is a depressingly young 31, according to one reputable GP.

Nicholas is especially concerned about the widespread availability of very strong and very cheap alcoholic drinks:

Various homelessness organisations are calling on the government to increase taxation on these products.

• Out in the cold on Christmas day: The growing homelessness crisis 22 Dec 2011

“We’re not anti-alcohol per se, but we don’t think cider and beer should be between seven and a half and nine per cent of strength and so cheap. I think [these drinks] are aimed at people with alcohol problems.

“A single can of Tennent’s Super or Carlsberg Super (non re-sealable can) exceeds the recommended daily intake of alcohol.”

It’s not all bad news, however.

Successive governments have taken some measures to address this issue through legislation. Towards the end of their last administration Labour were preparing to introduce a minimum price-per-unit on alcoholic drinks, while last month the coalition outlined plans for a minimum price for alcohol in England and Wales, following the Scottish Parliament’s vote in favour of minimum pricing.

“The policy caught all drinkers; the pint in the pub. It caused an outcry and they [Labour] lost support for it. What they should have done is tackle the super strength white ciders specifically.”

In the recent budget, the government increased the price of super strength lagers by 25 pence, a good start, says Nicholas, but there’s still a long way to go:

“We’d call on the drinks industry itself to behave more responsibly too. We also have concerns that increasingly unregulated wholesale companies are flooding the market and promoting these drinks very aggressively to local corner shops.

Yet there are signs the tireless campaigning of Thames Reach and other homelessness charities is having an impact even on the drinks industry.

Nicholas gives an example of a recent small but significant victory:

“Following a visit to one of our homelessness hostels Heineken took their super strength ciders off the market. It was great to see. We wish other drinks manufacturers would follow suit.”

Another demographic often affected by rough sleeping are those of uncertain immigration status. Over the past decade the expansion of the European Union has seen an increase in rough sleepers originating from central and eastern Europe. Amongst the many success stories there are a minority who do not manage to find steady employment.

If they have not worked enough to make sufficient National Insurance contributions they have no recourse to funds. With few prospects for them in the UK but no means of returning home, some individuals fall through the cracks. Many of them, again, resort to using substances in order to cope.

Thames Reach’s ‘London Reconnection Project’ is geared towards assisting migrants stuck in limbo – Nicholas estimates it has so far helped 1500 such cases return to their country of origin:

“They can go back to their homeland with dignity, hope and the chance to turn their lives around, to their families and loved ones or to the services which could provide them with support.”

Are they ever reluctant to go back?

“If you can’t get benefits or shelter options are limited.”

It is evident when speaking to Nicholas that he is keen to dispel a few media-fuelled misconceptions while he is at it:

“A lot of commentators have tried to link the spending cuts in with rough sleepers’ numbers but what we see on the ground doesn’t correspond with that.”

Mike doesn’t rule out the possibility of a connection, but feels it is too soon to say.

Looking ahead, though, the London Delivery Board (LDB) – set up under the aegis of Mayor Boris Johnson in 2009, the result of several different agencies, including various homelessness charities and the police, joining forces to alleviate homelessness in London – looks to have begun to bear fruit.

Nicholas explains the outcome thus far has been impressive:

“Since April 1st 2011, 70 per cent of all rough sleepers have not spent a second night out. In London there have been extra resources made available by the LDB to tackle the issue. How long people have been on the street is what matters.

“There’s a different type of support for long term rough sleepers than those who have just arrived.”

Nicholas also describes as an ‘urban myth’ the perpetuated image of some of the unemployed middle class suddenly finding themselves turfed out onto the streets.

He finds this narrative particularly misguided:

“I think editors will drive stories which would tie in with their readers’ fears. We’ll hear about middle class homelessness but it’s not what we’re seeing on the ground.

“When we talk to our outreach workers it’s usually people from the same troubled backgrounds. The idea that you are one pay cheque away from homelessness is not very accurate or helpful. Those we’re seeing wouldn’t have had a mortgage.

“If people distort who is really vulnerable to rough sleeping then the funding goes to the wrong place.”

“People want to talk about youth homelessness as a big issue too but previous governments have tackled that with legislation. In the last year only five under 18s were found to have been sleeping rough.”

The work of Thames Reach has thus far soldiered on relatively untroubled by the recession thanks in no small part to an increase of funding from the GLA, though Nicholas does admit that these austere times affect the charity sector in other ways:

“It’s more competitive and challenging in terms of hanging onto funding as there are lots of organisations bidding for it. I don’t want to say there’s been no impact at all.”

Nonetheless Nicholas prefers to concentrate on the silver-lining:

“More than a quarter of [Thames Reach] staff has experienced homelessness… People can escape it. It should only be a temporary blip in their lives.”

53 Responses to “Tackling homelessness in London”