Gary Dunion, chair of Common People, explains how Londoners can sack Boris Johnson, the Tory Mayor of the one per cent.

Gary Dunion is the chair of Common People, the non-partisan, progressive campaign organisation behind Sack Boris

The election of the next Mayor of London is in just nine days, and Boris Johnson’s lead has dwindled to a statistical tie. At Sack Boris we’ve been working towards that day for a year. When we started, some of our friends said we were wasting our time. Even though they wanted rid of him, they said, it could never happen because “everybody” else loved him. 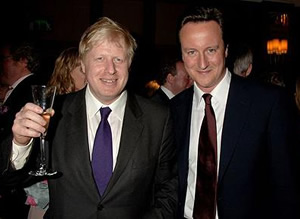 This was a mythology diligently constructed by the media and widely believed. And of course it was designed to have a chilling effect on opposition to him; if you thought you were in a minority, you would be less likely to raise your voice in opposition and you may not even bother to vote.

This, for us, was one of the big obstacles to getting rid of the worst Mayor since Thomas Bloodworth. And it was the one keeping the voters we related to best – younger, progressive, working class people – from the ballot boxes. So our plan was to try to debunk the myth of ‘LOLBORIS!’.

By giving people simple ways to show their thoughts about Boris, such as our Oyster wallets, we hoped to rob Boris of his air of invulnerability. To make his defeat – which was always very possible – look possible. To let ordinary Londoners know it was worth going to the polls because they could win.

In short, then, our strategy has been basically a turnout strategy from day one. And here I’d like to share with you two maps that show why we chose that strategy – and why, if London shows up at the polling stations, Boris is in big trouble.

First is a map of Boris Johnson or Ken Livingstone’s majority over the other in first preference Mayoral votes for each London electoral ward in 2008, and it shows much what you’d expect – big majorities for the Tory candidate in wealthier outer London, and in the very richest parts of inner west London; the second, black and white, map shows the turnout in each ward.

The similarity is striking. The more a ward supported Boris Johnson, the greater the turnout. (There are interactive versions of these maps, with detailed figures for every ward, on our website.

Boris won that election by just 150,000 votes out of more than two and a half million. It was no landslide.

These maps show us it’s likely that it’s not that he was the real choice of London, rather he simply got his voters to the polls. Not that his campaign had to do anything special to achieve that; high turnout is built-in to his support. Older, wealthy, suburban voters are far more likely to turn out. Working class voters, non-white voters and younger voters – all those who benefit most from a progressive Mayoralty – are always lower-turnout groups.

Since 2008 he has behaved in exactly the way you’d expect when you know that those who rely on the services he is responsible for largely do not vote. He’s hiked bus fares by up to 50%, handed money to people who drive around Chelsea by removing west London from the congestion charge, spent millions on a vanity project that shows he thinks buses are for looking at and putting on postcards – not travelling in – and scrapped the affordable homes quota.

‘So what if my policies are for the rich?,’ he thinks, ‘no-one hurt by all this will vote.’ He thinks he is safe, but with his lead already shrunk to a sliver, we only have to confound that expectation a little to tip the balance and sack him. In this election more than ever, these last nine days are about what we can do to boost turnout in those non-Boris supporting areas.

And more than ever during this period, we need your help. Sack Boris is a non-partisan campaign, but we’ve been fortunate enough to have a range of party activists from Labour, the Liberal Democrats and Green Party volunteer over recent months. Their parties will want them back now for their own work, so this last push will be done by those from no party who simply want to get rid of a Mayor who doesn’t care about people like them.

In the next week we need to distribute tens of thousands of How To Vote cards, showing Boris can be beaten and explaining how the Supplementary Vote system works so voters have confidence and use their votes effectively.

We need to share that advice online and by text message, from friend to friend, and we know success online depends on having a few champions who will spread the message tirelessly.

We need to rebut every Johnson lie, quickly and loudly, and we know the lies will come thick and fast as the trouble they’re in dawns on a campaign that expected to win easy.

All this means people. We need lots and lots of people, both inside and outside London. If you can help in any way, visit our website www.sackboris2012.com or contact us at [email protected], or on Twitter at @sackboris2012.

Keep in mind that Boris won by just 150,000 votes. If we get even a fraction more voters to the polls in Hackney or Harrow, Whitechapel or Walthamstow, Tottenham or Tulse Hill, he’s done for. Together, in nine days, we can Sack Boris.

106 Responses to “It’s all about turnout – if the many vote, together we can Sack Boris”