Ben Mitchell analyses the final report of the Riots, Communities and Victims Panel set up to examine the causes of last summer’s London and UK-wide riots.

You could be forgiven for thinking that the same report into last summer’s “England riots” keeps getting re-published over and over again. Such are the similarities of the conclusions being made that this would be an understandable mistake to make. 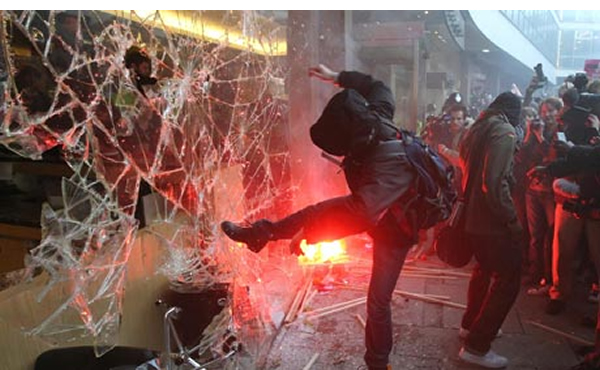 This week saw the publication of the final report (pdf) by the Riots Communities and Victims Panel; an independent group of experts brought together by the government to look into the causes of last August’s disturbances.

The report finds a whole range of reasons for the rioting, and comes up with a hotchpotch of recommendations, some of which could be best described as a little fuzzy, and had me wondering whether they had their priorities right.

“When people feel they have no reason to stay out of trouble, the consequences can be devastating.”

If policymakers had to take on board just one sentence from this report, it would be this one.

The moral lecturing, stern words, and promise of stiff prison sentences will have little impact when someone has reached a stage in their life when they feel they have nothing to lose by breaking the law.

As Camila Batmanghelidjh said last summer, many of the people caught up in the riots live according to:

It is with this in mind that the panel called for everyone “to be given a stake in society”. A society where its different components are working together. Where the police, schools, local authorities and voluntary groups work in tandem.

Similarly to a report last November commissioned on behalf of the Cabinet Office, the panel found significant discontent with the police as a driving factor behind the riots.

If this was the rioters’ catalyst, to get one up on ‘the law’, according to communities affected by the trouble, a number of other important factors contributed:

“…a lack of opportunities for young people; perceptions about poor parenting and a lack of shared values; an inability to prevent re-offending [and] concerns about brands and materialism…”

Frustrations were expressed that public services simply weren’t doing enough to tackle any of these issues:

“We have found that it is too easy at every stage of their lives for troubled individuals and forgotten families to fall through the gaps of public service provision. They often have multiple issues, which no single agency can resolve.”

In response, the panel has issued a series of recommendations, the most noteworthy of which include:

• Better early intervention for “forgotten families [who] bump along the bottom of society”;

• Financial penalties imposed on schools for every pupil leaving school without the appropriate levels of literacy, with schools covering the cost when they find a “new provider”;

• Schools to work on pupils’ “self confidence” by “building character”, in an acknowledgement that not all parents are good at instilling “positive attitudes and behaviour”. This would certainly come under the ‘fuzzy’, ‘wishy-washy’ category;

• Better work opportunities for young people, with a ‘job guarantee scheme’ for those out of work for two years or more, and

• Alternatives to prison for young people, and mentoring for those who have been to prison with “wraparound” support.

I want to explore a couple of these in more detail.

Whilst the panel has its ‘red lines’, it is clear that some require more urgency than others.

It is a little concerning that the sections covering the role of school devote far more time to talking about the importance of “character building” and “personal resilience”, (nine pages) than looking at educational attainment (one page):

“It is easy to write off concepts such as ‘character’ and ‘personal and social development’ as an unnecessary and burdensome distraction for public services… However the panel believes it is important that this issue is not side-lined.”

Surely, getting the basics right should be the overriding priority of schools? Especially when the report found only one in ten rioters achieved five GCSEs grades A*-C.

We know from earlier research, that the report cites (page 33, pdf) that poor attainment at school can lead to a whole cycle of problems.

The panel’s findings pointed out the link between rioting and deprivation:

“Our unique analysis shows that 70 per cent of those brought before the courts were living in the 30 per cent most deprived postcodes in the country.”

They went on to show that of the 10-17 year olds caught up in the trouble (26 per cent of the total), 46 per cent were defined as “living in poverty”, 66 per cent had special educational needs, and 42 per cent were claiming free school meals, against national averages of 12, 21 and 16 per cent, respectively.

The link between poverty and lack of educational achievement has been well documented, and is tackled in rigorous detail by a 2010 study (pdf) carried out by the RSA (Royal Society for the encouragement of Arts, Manufactures and Commerce).

“By the age of three, poor children have been assessed to be one year behind richer ones in terms of communication, and in some disadvantaged areas, up to 50% of children begin primary school without the necessary language or communication skills.”

And these educational inequalities only widen over time:

“Furthermore, these children are more likely to attend the lowest-performing schools in deprived areas.”

Which probably tells you something about Oftsed inspections, considering the panel’s report found schools where the rioters came from had been, on average, rated by Ofsted as “good” (page 60, pdf).

When it comes to GCSEs, figures released last month reveal just over a third of teenagers from deprived backgrounds left school with five good GSCEs, compared with 58% nationally.

It would therefore have been preferable for the riots panel to have spent rather more time on educational attainment, and how crucial an escape route it can be for those from poorer backgrounds (i.e. the rioters), than putting more energy into nebulous concepts such as “character building” and “personal development”.

One follows the other no doubt.

Where the report is strongest is in its call for better early support for “troubled families”. It is here that it tries to deal with one of the issues that most cropped up during its Neighbourhood Survey: poor parenting.

Whilst this is an area of most contention for many on the right (unsurprisingly, The Daily Telegraph and Daily Mail attributed it to be the leading cause of the riots) it is also one of the hardest to pin down:

“There are no data available to enable us to assess whether there is any link between the quality of parenting and the likelihood of an individual being involved in the riots. However, we do know that being abused or neglected as a child increases the likelihood of arrest as a juvenile by 59 per cent.”

Instead, the panel focused its attentions on the government’s Troubled Families Programme (TFP), which it supports – but found little relation between the TFP and the rioters’ families:

“In a poll of 80 local authorities conducted by the Panel, only five per cent felt there was a great deal of overlap between the troubled families and rioter families.”

Extending early intervention schemes to cover 500,000 families, rather than the TFP’s 120,000 target, and getting disparate bodies to exchange information are seen as two key areas to address:

“We recommend that providers work together and plan services around forgotten families rather than focusing on individuals.

“State agencies dealing with the same families do not tell each other what they know or what they are doing, wasting time and money. We recommend the creation of a legal presumption to share data across local agencies.”

Plenty of familiar findings for the government to digest no doubt.

As always, the question of whether similar events occur again depends partly on how much ministers are prepared to listen.

Are they able to put populist bluster – demanding harsh (disproportionate) prison sentences and lazily blaming ‘broken Britain’ – to one side, and engage with the experts and those affected by last summer’s events? Or do we continue with the usual cycle of criminality, followed by tough rhetoric; half-hearted solutions, diluted at the first whiff of anger by a right wing press baron?

I think we already know the answer.

32 Responses to “Responding to the riots: We need more than fuzzy buzz words from the government”