Nick Clegg finds himself under increased pressure on the government’s snooping plans from his own side, with Lord Ashdown today condemning the proposals.

Having been dropped in it by David Cameron for supporting then seeking to oppose the government’s State snooping plans, Nick Clegg finds himself under increased pressure from his own side, with Lord Ashdown condemning the “snooper’s charter” as “no different” to previous Labour plans the Lib Dems opposed. 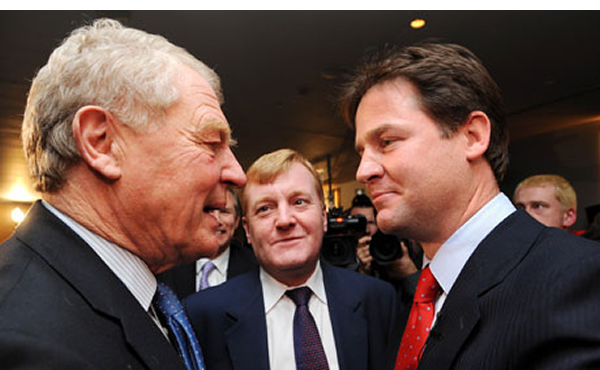 In 2005 the previous government used its presidency of the EU to lobby for a directive requiring domestic telephone and internet providers to retain full records of who contacted whom for a year and to provide the government with access to them on demand. It became law in 2009.

This legislation was opposed by European Liberals and has had a very rough ride. Sweden has yet to enact it and courts in Germany, Romania and the Czech Republic have ruled it unconstitutional.

The coalition Government promised to halt this move towards greater surveillance. But now it seems to propose not an amendment but a massive extension.

Attacking as “sophistry” the spin that somehow recording “data” rather than “content” would not be a fundamental breach of privacy, Ashdown adds (£):

The government’s new proposals to extend the retention of e-mail, social media, websites and internet phone records breach these basic principles; they are disproportionate and seek a generalised extension of state monitoring that applies to everyone, rather than to individuals.

The Government claims that it will have unfettered access only to “data” (ie, sender, recipient, time and duration) rather than content, so this does not constitute “a communications interception”. That is sophistry.

It is one of our rights as free citizens to talk to whom we wish, when we wish and wherever we wish without the State knowing about it, unless there is good cause for it to do so. It is not just the content of our communication that is private. It is the fact that it occurred at all, when and for how long.

In the case of an e-mail, it would plainly reveal the whole thing from the sender through to the signature at the end.

Ashdown’s intervention in the debate is the latest embodiment of Liberal opposition to the illiberal plans, which, as he points out, are a clear contradiction of the coalition agreement (pdf), that states:

We will be strong in defence of freedom. The Government believes that the British state has become too authoritarian, and that over the past decade it has abused and eroded fundamental human freedoms and historic civil liberties. We need to restore the rights of individuals in the face of encroaching state power, in keeping with Britain’s tradition of freedom and fairness.

We will implement a full programme of measures to reverse the substantial erosion of civil liberties and roll back state intrusion… We will introduce safeguards against the misuse of anti-terrorism legislation. We will further regulate CCTV. We will end the storage of internet and email records without good reason.

If the plans continue, and Clegg fails once again to stand up to Cameron, expect more opposition; as Prateek Buch, executive member of the Social Liberal Forum, wrote on Left Foot Forward last week:

There’s a matter of liberal principle that the coalition needs to accept. These proposals apparently stem from the desire to stamp out criminal and terrorist activity.

But in seeking to safeguard our safety, liberals believe that the balance between civil liberties and State surveillance should be extended in favour of the former, that the very values and way of life we seek to protect should not be jeopardised in capitulating to an authoritarian security lobby.

Should the power to monitor, without oversight and scrutiny, how we communicate with each other be extended and not put back in its box as it should be, the government will set a dangerously illiberal precedent – and that simply can’t be allowed to happen on the Lib Dems’ watch.