Reversing the slide in support for international aid is critical to commitments being met; everyone engaged in the sector can play a part in making that happen.

“I am not a crook,” said Richard Nixon in 1973. With the word planted firmly in their heads, millions of Americans subconsciously concluded that he was, in fact, a crook. As George Lakoff and many others have shown, the framing of any argument is critical to how it is received by the audience.

Last week, the House of Lords Economic Affairs Committee published their report arguing the government should abandon its target to raise aid to 0.7 per cent of gross national income (a similar measure to GDP) by 2013. While the report may have been light on evidence, it appears to be in line with public opinion. Is it possible that NGOs, rather than ermine-clad peers and right-wing rags, are to blame?

Development NGOs have long reassured themselves public antipathy for aid only takes place in the context of the misguided view that DFID’s budget is several times its actual size. There is plenty of evidence to suggest the public are ignorant of overall aid levels but worrying new polling by the Institute for Development Studies has found that even when informed about the amount spent per person annually on aid, there is significant support for cutting aid in the short term.

As Chart 1 shows, support for cutting aid is rising. 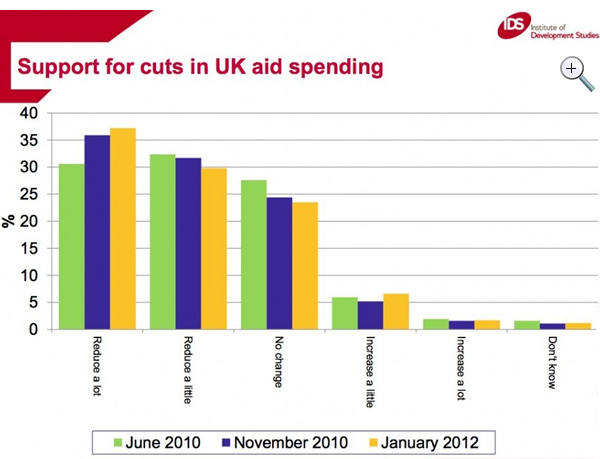 YouGov have also carried out a survey of public perceptions for the Bill & Melinda Gates Foundation. Their evidence shows support for aid and the view it is effective are low by comparison with other large EU countries.

As Chart 2 shows, on a scale of 0 to 10 where 0 means the UK should not give aid at all, and a score of 10 means it should give aid very generously, the UK averages an underwhelming 4.3. 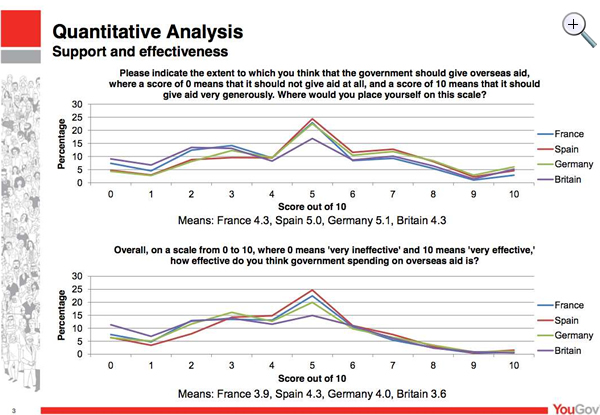 All this begs the question of why people feel the way that they do, why support for aid is dwindling and what, if anything, we can do about it?

IPPR and the Overseas Development Institute have recently conducted four deliberative workshops in London, Newcastle, Edinburgh and Evesham to get underneath these headline findings. Deliberative workshops differ from focus groups by allowing an argument to develop and seeing how people respond to new facts and information (from both the moderator and from each other).

Language experts, Linguistic Landscapes, attended each of the four workshops to examine the choices people made in talking about aid and development.

Each of the workshops aimed to answer:

• How are issues related to development and aid perceived?

• Why do people hold the attitudes they do? What influences these attitudes?

• How do people perceive issues of food and hunger?

The findings will be published later in the spring but they will address:

• How the public feel about the images used by charities;

• How they distinguish between the ideas of ‘development’ and ‘aid’;

• What perceptions of corruption and phrases like ‘charity begins at home’ really mean; and

• How the language, values and frames used shape the way they engage in the issues.

The cross-party consensus on aid is a great victory for progressives and a clear example of politicians across the spectrum leading public opinion. But in a democracy they do so on the basis of trust from the general public. Reversing the slide in support for aid is critical to political commitments being met. Everyone engaged in the sector can play a part in making that happen.

IPPR and ODI organised a retreat for development NGOs and experts on public opinion and cognitive science last week. More details are available on request. @wdjstraw