Gurjunder Dhaliwal reports on his Ed Miliband’s speech at Labour’s local elections campaign launch and the question and answer session that followed.

Ed Miliband, alongside the Shadow Cabinet, launched Labour’s nationwide local election campaign in Birmingham today; Gurjinder Dhaliwal reports on his speech and the question and answer session that followed

After an awful week for David Cameron with #pastygate, #donorgate, #fuelgate, #nhsgate and #grannygate all to the fore, and following Labour’s own bad end to the week in Bradford West, Miliband laid out his election platform for May 3rd, saying the Conservative-led coalition has the wrong values, wrong priorities and wrong choices. 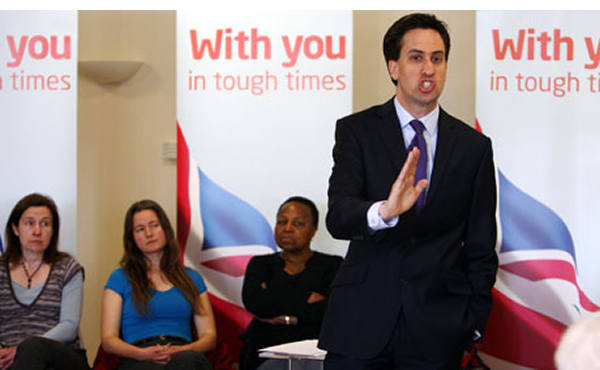 He said the prime minister had shown he is out of touch with ordinary voters, cannot govern for the whole country, and “betrayed middle Britain” by cutting taxes for the rich and caring more about his millionaire Tory donor friends rather than the public at large of which he is supposed to represent.

The Labour leader faces a massive test in just over 30 days when he hits the polls. Today’s speech should chime positively with the electorate at large. Crime, NHS and jobs were the highlighted topics.

Accompanied by Harriet Harman, Yvette Cooper and Hilary Benn among others, it was confirmed Labour would do things differently from the government – interestingly, without spending more money.

On crime, robbery, theft and violence is going up, yet as shadow home secretary Yvette Cooper highlighted the government are cutting in excess of 16,000 police officers from the service. Cameron has claimed frontline policing will not be affected – empirical evidence shows him to have been wrong.

A member of the audience told Miliband he was forced into taking compulsory retirement but now through a private firm he is being called back into work on a routine basis; decades of frontline experience is being kicked out, only to be replaced by the private sector at an even more costly rate.

Crime does not operate on a 9 to 5 basis, and neither should the response to crime be delivered on a 9 to 5 basis, Miliband pledged. He spoke tough on crime calling for the strengthening of police powers on anti-social behaviour and the return of the Anti-Social Behaviour Order.

He called for a compulsory response from authorities to any reports of anti-social behaviour within 24 hours. This would be a considerably marked change from present. At the moment, it seems, members of the public have to wait weeks upon weeks and fill in reams upon reams to report.

Make offenders understand what they have done, punish them and then force them to undo and fix the damage done to victims, Miliband also demanded. If Labour were in government, from day one he promised a “common sense approach to policing”.

Another audience member worked for 104 hours in addition to work hours during the riots, with no overtime pay, because large numbers of his colleagues were done over due to costly cuts. Miliband pledged more police, not less, with Cooper adding low morale in the police has a huge impact on its effectiveness.

As with the privatisation of the police service, the shadow home secretary said that though public-private partnerships have proved useful, there is a line when it comes to the police and the health services, a line the Tories have crossed.

On the NHS, Miliband said:

Billions of pounds will now be spent on bureaucracy, he said, adding if Labour were in government this money would be spent to safeguard and protect the jobs of 6,000 nurses whose jobs are currently under threat. Labour deputy leader Harriet Harman confirmed the party will repeal the health bill, which she describes is “a free market free-for-all”, if it wins the general election.

On jobs, Miliband’s three main priorities for government ought to be “jobs, jobs, jobs”, having pointing out we are seeing a “jobs crisis”. Tackling the problem of youth unemployment is key to future growth sustainability; it is simply untenable to have the present levels of unemployment.

The latest YouGov poll (pdf) for The Sunday Times places Labour in front with a nine-point lead over the Conservatives – though as the Bradford debacle showed, merely not being the Tories isn’t of itself enough; Miliband needs to speak in a language people understand, with a clear, credible and alternative vision.