With referendums in ten of the biggest cities outside London in May, residents in Manchester will decide if they wish to have an elected mayor. 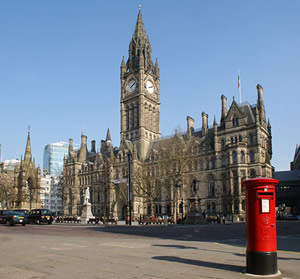 With referendums in ten of the biggest cities outside London in May, residents in Manchester will decide if they wish to have an elected mayor. Liverpool went straight to a mayoral model on the basis of a council vote, which has already attracted more money to Liverpool.

This fact alone has politicians in near-by Manchester further assessing the impact that not going for an elected mayor may have.

Particularly, as a question mark hangs over the constitutional situation, post the May 3rd ballot, if a majority of core cities vote for elected mayors and benefit from that model, when a re-run referendum could happen.

Last month, Labour leader Ed Miliband announced his support for elected mayors, speaking of “stability” as one of the main gains, something the deputy leader of Manchester city council, Cllr Jim Battle, argues they already enjoy.

“We are awaiting a government announcement on the Manchester city region deal, which has been achieved by first class leadership and not an elected mayor in sight.

“Is there an appetite for an elected mayor in Manchester? We don’t think so. Previous consultations have rejected the notion.”

For many reasons, Manchester is an interesting case. Unlike other cities with referendums, on the face of it there are no distinguishing reasons to go for a yes vote. Potential new powers could include money raising abilities for major infrastructure projects such as a further extension of the Metrolink tram system, for example.

Politically, Manchester is already proudly Labour in its heritage and has a unique governance system.

Leese already has the power and influence of a city region mayor, a format which is currently not on offer under the Localism Act, the law which brings these referendums onto the agenda. In fact, yes campaigners in other cities might be wise to look at the AGMA model for how things might work with an elected mayor, in terms of scope and joined-up thinking.

“[However], this referendum is for just one of our ten local authority areas, do we plan to have ten mayors eventually running Greater Manchester?”

Daniel Mouawad, chief executive of pro manchester, is firmly in the ‘yes camp’ and looks to the UK capital for comparison.

“The mayoral model works for London and, regardless of the merit of the decisions, London has attracted the 2012 Olympics, introduced the congestion charge, given Crossrail the green light and driven through the introduction of smart ticketing through the Oyster card.

“London works because its mayor leads and coordinates the integration of strategic issues across a number of substantial policy areas, such as the economy, environment, spatial planning and transport… This is exactly what Manchester needs.”

The specifics of the new powers on offer are still unknown. The Localism Act does not in itself give any extra formal legal powers to a new directly elected mayor.

Despite a three-month consultation that closed in January, the Department for Communities and Local Government now says a “bespoke” approach has been chosen by the government, to be decided by the mayor and local community.

Arguably the UK’s second dominant city and the north west’s economic hub, Manchester is not unused to punching its weight globally; Graham Stringer MP (Labour, Manchester Blackley and Broughton), when leader of the city council, negotiated the 2002 Commonwealth Games for Manchester.

Citizens and City Councils have a lot to consider. Neighbouring Salford already voted yes to an elected mayor in January when the English Democrats triggered a poll and on Sunday former Eccles MP Ian Stewart was selected to lead Labour’s campaign.

Salford will choose its first elected mayor on May 3rd, the same day as ten other cities decide whether to follow suit; the question is: will Manchester?

• A call for progressives to back directly-elected mayors – Kevin Meagher, August 5th 2011

16 Responses to “Will Manchester say yes to an elected Mayor in May?”