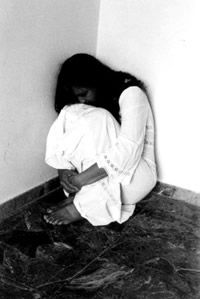 Last week, there was outcry when a plane of refused asylum seekers was returned to Sri Lanka by the UK government, despite a growing body of evidence from organisations such as Human Rights Watch and Freedom from Torture that returnees risked facing torture on return.

At the Refugee Council, a high proportion of women accessing our therapeutic services for survivors of sexual violence are from Sri Lanka. The vast majority have been raped or tortured. And yet almost half were refused asylum – they could have been on that flight.

This is a major concern for us – that women who have fled violence are being wrongly refused and then facing further violence: either when they are returned to countries like Sri Lanka, or disturbingly, here in the UK.

The UN states that refugee women are more affected by violence against women than any other women’s population in the world. This often occurs in their own countries – the use of rape as a weapon of war has been well documented.

Up to 500,000 women were raped in Rwanda during the genocide. In some regions of Eastern Democratic Republic of Congo (DRC) as many as 70 per cent of girls and women have been raped or violated.

Of the women we worked with through our therapeutic services last year, 57% had experienced violence, for being a woman, in their own countries. Refugee women often also face violence during their journey to a safe country. It therefore follows that a significant proportion of asylum seeking women living in the UK have experienced violence prior to arrival.

But shockingly, asylum seeking women also face a high risk of violence after they have sought safety in the UK. More than a fifth of the women accessing our therapeutic services had experienced sexual violence in this country.

Perhaps even more shockingly, the UK government is doing very little to address the problem.

The risks facing women asylum seekers has merely a small mention in the government’s Violence Against Women strategy (page 18, pdf). It points out that the UK Border Agency (UKBA) is dedicated to being as sensitive to the needs of women as possible throughout the asylum process – however, Whilst work is being done to improve women’s experience of the asylum system, there is a long way to go.

In fact, we would go as far as to say the UKBA’s harsh asylum policies are largely responsible for the fact women seeking asylum in the UK are left open to unacceptable levels of violence.

Firstly, it is extremely difficult for women fleeing persecution to get the protection they need in the UK – 70% of asylum claims from women are rejected.

Refusal rates are higher for women from some countries. Take Sri Lanka for example – between 80-89% of women’s claims were rejected each year between 2006-10, despite widely reported ongoing human rights abuses in the country. It is clear that women are often refused because the asylum system does not accommodate for their specific needs, making it extremely difficult for them to make their case.

Take the lack of childcare at screening interviews for example – having to explain to an official that you were gang raped while your children are in the same room is unthinkable. Furthermore, government cuts to legal aid mean women struggle to get the advice they need to make a strong case for protection. Then, when women are refused, they are often unable to access financial support, and are forced into destitution.

Instead, women are forced to find other ways of surviving: illegal work or begging, entering into exploitative or abusive relationships, engaging in transactional sex, or even resorting to prostitution, just to get a bed for the night. It is in these situations the women we work with are experiencing violence. It is an unacceptable situation for any human being.

It is also unacceptable that while the UK government takes steps to protect women against violence in its Violence Against Women and Girls strategy (pdf), asylum seeking women are missing out.

It is never acceptable to use women’s immigration status as an excuse for failing to address the violence they experience.

This International Women’s Day we are publishing a briefing (pdf) calling on the UK government to change their asylum policies to ensure women are not only protected from being returned to countries where their lives are at risk, but moreover, while they are in the UK, they are protected from violence. Only then will the government’s efforts to tackle violence against women go any way to benefiting asylum seeking women living here.

• The coalition are turning the clock back for vulnerable women – Vera Baird QC, March 8th 2012