Alison Garnham of the Child Poverty Action Group, challenges the coalition to defend how the distributional analysis of their tax and benefit changes is fair.

The information presented in the charts below comes directly from government.

Chart 1: The fair deficit reduction we were promised: 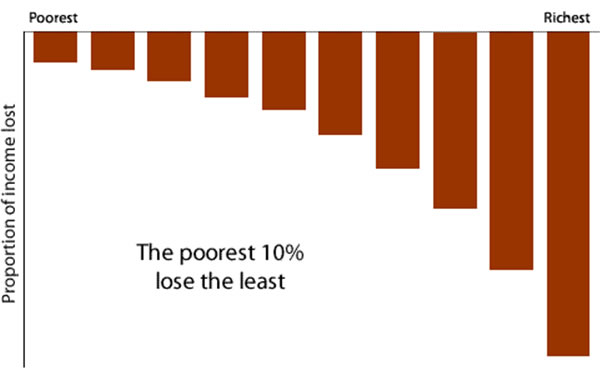 Chart 1 presents what the cuts impact might look like if it is shown to be progressive across the income distribution – a common sense view of what ‘fairness’ means; Chart 2 presents what the government is actually doing.

Chart 2 is reproduced from the government’s own distributional impact analysis and you can find it on page 3 of the “Impact on households: Distributional analysis to accompany the Autumn Statement 2011” document (pdf) they published in November 2011.

It proves that two of the government’s key claims about deficit reduction cannot be sustained:

1. “The deficit reduction will be fair; and those with the broadest shoulders will carry the greatest burden.”

2. “We have no choice but to make cuts to welfare benefits and tax credits because of the state of the nation’s finances.”

This is not the common understanding of fairness.

The second claim is regularly used when ministers are reminded of warnings from the Institute for Fiscal Studies (IFS) that their approach to deficit reduction threatens to increase child poverty by 400,000 children over the current parliament.

But there is a choice. There is tremendous room for manoeuvre by increasing the proportion of income contributed from deciles six, seven, eight and nine. Given that their incomes are much larger than the lower deciles, a relatively small rise in their contribution could allow for a large fall in the contribution from the lower deciles.

Please share this graphic with anyone who is defending low income families against the cuts as evidence that there are other options for the government in next week’s budget.