Though piracy, security and terror topped the agenda at the conference on Somalia, we mustn’t let it’s less high-profile development needs slip under the radar. 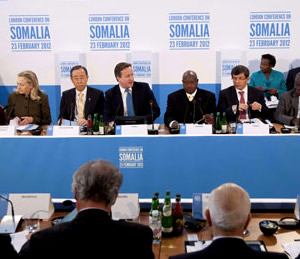 As the summit concluded, achieving security and stability is indeed crucial to Somalia’s future – no state will ever achieve its full potential while it is riven with conflict.

The humanitarian crises caused by the war must also be properly dealt with, for as long as needed – with half the Somali population living in need of immediate food aid, and 10% in “extreme famine”, the country’s talent is tied up with surviving, not rebuilding.

But alongside these urgent needs we must also recognise the importance of basic long-term development assistance in the process of helping Somalia make the transition from being a failed and fragile state to being an independent and secure country.

Education is in a dire state in the country, which has a literacy rate of just 38 per cent, and 25% for women. That needs to be addressed urgently and not as a secondary concern, including in refugee camps, which continue to grow.

Only a tiny proportion of the 156 000 children in the vast Dadaab refugee camp have access to education, perhaps not surprising given only 2% of humanitarian aid is spent on education worldwide. But the result is that a whole generation is being left without a basic education, or the opportunity and aspiration that come with it.

Somalia’s health also remains poor, and although it is made worse by the frequent attacks on hospitals and feeding centres, many diseases and deaths are completely preventable.

Maternal and infant mortality rates in particular are amongst the highest in the world, with more than 1% of births resulting in the death of the mother and a shocking 10% of infants dying before their first birthday. Improved sanitation and access to basic medication could cut those rates dramatically, and our development programme should reflect that.

There have been some successes, notably under the last Labour government which increased development aid to Somalia from £3 million to £34m. That aid delivered health programmes in south-central Somalia including basic treatment like vaccinations and deworming to 650 000 adults and acute malnutrition treatment for 120 000 children.

That is good news, but the problem is far from solved.

Tackling piracy and improving security is a must, but the country’s long-term problems mustn’t be forgotten. Strong, democratic institutions will coordinate the future response to both these challenges, and the international community needs to commit to supporting their establishment and then supporting its programmes in both these areas, however long that takes.

Somalis need security, but they also need health, life and opportunities. Better security will help secure that – but we mustn’t forget the basic development issues that are just as badly needed in the long-term.